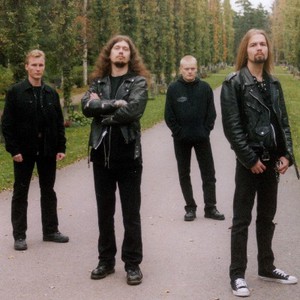 Mustan Kuun Lapset ("Children of the Black Moon" in English) was found in Hollola, Finland in 1993 with a line-up consisting of Kari Kinnunen (bass), Mikko Hautala (drums), Pete Lehtinen (voc, guitars & synths), Pete Tamminen. Their first release was a demo titled "...Kunnes Loppuu Y?" (limited to 100 copies). It included three songs, out of which one of was even played on the Finnish national radio.

The second demo called 'Varjomaa' was released in 1997, thirteen months after the first one (limited to 150 copies). After the release of 'Varjomaa', MKL was in contact with certain distributors and record companies but no deals were made. Therefore, the band decided to self-release their next cd.

The "Prologi", a self-produced mini cd was published in December 1998 and it included four regular songs and a bonus track. 1,5 months after the release, over 200 copies of the "Prologi" mini cd had been sold almost without any advertising. Soon after that all 500 copies were sold. MKL signed a deal with Nocturnal Music (Italy) for the reprint of "Prologi". The re-produced "Prologi" was published in December 1999 and NM proposed another release deal which MKL approved. A year after that, in December 2000, split cd with another Finnish band came public and the co-operation with NM ended.

Kai Hanninen joined MKL in the beginning of 2004 to replace Kari Kinnunen, who resigned in the autumn of 2003. Hanninen is also known as the lead singer of punk act Olotila and plays guitar in the black metal band Acab? El Silencio. In summer 2004 MKL signed a deal with Roihu Records (Finland) to release the third album "Talvenranta" in spring 2005.

Once again, MKL entered Mika Haapasalo's PopStudio (Loimaa, Finland) in January 2005 to record their third full-length album "Talvenranta". The follower to the 2003 album "Kauniinhauta" was released in April 2005 by Finnish Roihu Records. The album was released as a special edition digipack including a multimedia track.

In 2006 MKL made a deal with a Finnish metal label DIES IRAE to release their fourth and final full-length album. The follower of "Talvenranta" (ROIHU RECORDS, 2005) was recorded and mixed again at Mika Haapasalo's Popstudio (at the new location in Helsinki, Finland) during Easter 2007. The album, "Viimeinen Laulu Kuolemasta", saw the daylight in August 2007.