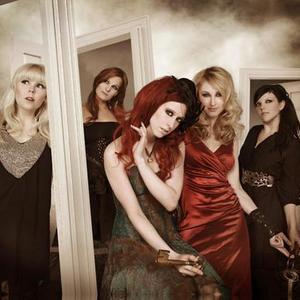 1)
www.indica-music.com
Jonsu (vocals, violin), Heini (bass), Sirkku (keyboards), Jenny (guitar) and Laura (drums) founded Indica in 2001. Before this the girls had already spent their entire childhood surrounded by classical music and had also played in a few different band line-ups. In the Christmas of 2002 Indica signed a management contract with Peter Kokljuschin and in 2003 a record deal with SonyMusic, leading to Indica starting work on their debut album.

The album was co-produced by Gabi Hakanen and Erno Laitinen, and from here began the journey of Indica and Erno together which took them through three albums. The 30,000 platinum-selling debut album Ikuinen virta was released in 2004, and from this album the title track as well as the song Scarlett were released as singles. Indica's second record Tuuliset tienoot was released in the autumn of 2005 and went on to sell over 20,000 discs, the third album Kadonnut Puutarha was released in spring 2007 and their fourth, Valoissa, in fall 2008.

Indica's music and lyrics are written by the band's charismatic singer Jonsu, who started her composer's career even before she went to school, writing little 'symphonies' two bars long. Jonsu has explained that to her the biggest inspirational source for writing music is the music from movies. The lyrics stem from her own life, the lives of her friends, and also from dreams.

Indica, known for their playful and lively stage presence and their distinctive music, went travelling outside Finland near the close of 2007 when they performed as the support act for Nightwish during their Scandinavian tour. Indica were well received in the other Nordic countries. A tight collaboration between Indica and Nightwish frontman Tuomas Holopainen started on this tour, aimed at creating the next album. Tuomas is the producer of the fourth Indica longplayer, released autumn 2008 and titled Valoissa.

Holopainen was also involved in mixing the band's new album "A Way Away" which is a compilation of Indica's best songs, re-recorded in English for the international market. The recordings were co-produced by Roland Spremberg (A-ha and Him, among others) and mixed by Mark Schettler (Simply Red, Bullet for my Valentine, just to mention a few).
"I had butterflies in my tummy when I first sang the English lyrics", Jonsu remembers and listeners will as well when they hear "A Way Away", an album filled with lush soundscapes and rich emotion. "Alongside nature, film soundtracks have the biggest influence on me", says the songwriter.
The album "A Way Away" is due in June 2010 in Europe and the first output "In Passing" is released in late March.


2)
Indica is also a psytrance goa solo-project of Eliad Grundland a.k.a. The Space Buddha.
The album Visions Of Tomorow belongs to this artist.

The first Indica album "Fairy Tales" was released in the year 2000 and entered the next millennium with a pure goa sounds and a mindful of extreme ideas.

The second album - "Visions of Tomorrow" is a reflection of Indica's long career in the worldwide trance scene. Being one of the pioneers in trance scene, allowed Indica to create a strong connection between all periods of the trance stream evolution. The new concept of the fresh Indica sound combines the original classic goa vibes among the elements of today's unlimited, energetic dance floor culture.


3)
Indica is a rock/electronic/psychedelic band from Argentina.
The band has released one album:
Liebe (2006, WTKL Records)

Indica is a music band of psychedelic electronic rock of Argentina, formed in Buenos Aires in 2002. The group is compound for Rub?n Farzati (Vocals, Guitar, Laptop), David Vera (Vocals, Bass, Laptop) and Gast?n Del Popolo that he united to the band at the end of 2006 to finish assembling the rhythmic part. The band is named Indica, like a counterculture art gallery in Mason's Yard (off Duke Street), Mayfair, London, England during the late 1960s. Besides Indica is a typical kind of flower from the Southeast Asia, very rich in cannabinolis and great psicoactivity. So this name results very appropriate for this eclectic and experimental band.
From the beginning, Indica has been related with bands, like The Beatles, The Chemical Brothers and Blur. The first singles were Volador, Flor Rota, Liebe and Carrousel composed during the first years of the band stop then to sum up their premiere album titled "Liebe"

The name of the album represents the word "love" in the German language, defining this way an album with cynic, surrealist lyrics and a sound that it oscillates among the psychedelic, the electronic and the rock.


4)
Indica is also a defunct mathcore band from England.


5)
Indica is a three piece stoner rock/metal band based in Dundee, Scotland.


6)
They released a live demo called 'Burn' in 1992 and were named the Best College Rock Band of 1992 by MTV. Jim Adams played with them while on a break from Defiance and participated in the recording of the final release under the Indica moniker, the 'Pavement' EP (which can be downloaded in full from Defiance's website) and left before its release. The band later changed their name to Ultraspank and began playing industrial rock.