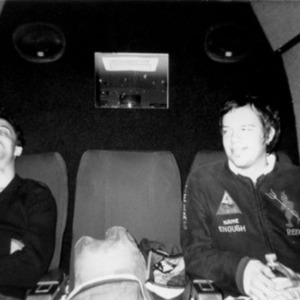 As Adam Wiltzie from Stars of the Lid told Sadness is in the Sky fanzine, his collaboration with Bobby Donne from Labradford began when "We all met during a Texas swing of a Labradford tour that Stars Of The Lid opened for back in 1996. They stayed at my house for a few days and we became great friends. A year later I asked them to collaborate on the Kahanek Incident remix for Trance. Subsequently Mark and Carter moved away from Richmond around this time, so Bobby ended up doing their end of the work.

Eventually he brought up the idea of doing another record separate from our other projects."

The duo exchanged tapes over the course of a year or two and then Bobby Donne ventured to Austin, TX for a week to record at Wiltzie's home studio in May 2000. The in-person collaboration moved much more quickly than the exchange of tracks by mail. One track on the Aix Em Klemm album, "Sparkwood and Twenty-One", was written and recorded in the course of one day.

The duo took the mysterious name Aix Em Klemm and the self-titled debut came out in the fall of 2000. Kickbright fanzine noted that "The compositions shimmer and simmer, using instruments and sounds over a beatless soundscape, not knowing form or shape. They wander and develop then make way for other spaces. It's a sad, desolate sounding album. The last song has this quiet keyboard melody. It sounds so fragile and alone."

In choosing Aix Em Klemm as the Underground Album of the Month in the Dec. 2000 issue of Mojo, Andrew Carden wrote that:

"Leftfield collaborations of this sort are either sublime, or more often, superfluous, neither party's ideas gelling or bringing anything new to the table. Fortunately, Aix Em Klemm definitely falls into the former category with these six tracks of layered ambient sounds, real instruments and slowly building beauty. Opening with the funereal echoes of 'The Girl With The Flesh Colored Crayon', the hushed vocals and deep sonar sounds bring to mind Gavin Bryars' The Sinking of the Titanic. Further in '3x2 (Exit)' mixes Pole and John Carpenter, all dark drone and electronic glitching, while 'The Luxury of Dirt' 's aquatic swathes recall Fripp & Eno's joint efforts. Inevitably there are traces of Labradford - in the tender calm of 'Sparkwood and Twentyone' and the delicate currents of 'Sophteonal', for instance - yet Aix Em Klemm create their own distinct identity. Let's hope they get together some time."

Since the release of their album, Adam Wiltzie has moved to Bruxelles, Belgium. Bobby Donne plays bass in Spokane and is a member of Richmond hiss-manipulators Cristal. In February of 2008 he joined Tulsa Drone as full time bassist. Still, you never know when Aix Em Klemm will reform for another recording.