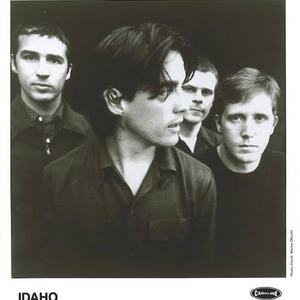 One of the most prolific, consistent, and unsung acts of the slowcore movement, Los Angeles' Idaho centers itself around four-string guitarist and vocalist Jeff Martin, a talented songwriter who has gained comparisons to Mark Eitzel (American Music Club), Mark Kozelek (Red House Painters), and Neil Young from the few journalists who have paid attention. Despite the lack of recognition from the press and a low profile, Idaho has gained a decent-sized underground following through a steady release schedule and sporadic touring.

Martin and high school friend John Berry began writing songs together in the '80s, meeting up occasionally throughout the years as something to do without a great deal of seriousness to it. They gave a tape of their work to an acquaintance who knew someone at Caroline, and soon enough, the duo found themselves with a recording contract. The duo actually debuted with the "Skyscrape" single on Ringer's Lactate in 1992 and released their first EP, Palms, on Caroline the following year. The full-length Year After Year was released by the end of 1993, with Mark Lewis and Unsane's Vincent Signorelli providing help on drums.

Berry exited for 1994's improved This Way Out, leaving Martin to himself. Receiving assistance from another batch of guest drummers (including frequent aide Joey Waronker), he played every instrument, including piano (Martin is classically trained). Since Martin wanted to keep Idaho a touring entity, he enlisted a semi-permanent supporting cast and, in turn, gave up some of the writing responsibility for 1996's Three Sheets to the Wind -- he had found it impossible to teach others the songs and have them play them the way he wanted. As a result, the bolstered lineup made for Idaho's most muscular record, featuring their loudest guitars but not sacrificing any sense of intimacy. The thicker sound pricked the ears of more journalists, who generally find the record to be Idaho's best overall.

Despite their recent underground success, Idaho found themselves ejected from Caroline. The group reverted back to a duo, with Martin retaining guitarist Dan Seta while the other two members, Lewis and Terry Borden, formed Flotilla. They also signed on with the smaller Buzz label, releasing The Forbidden EP and Alas in 1997 and 1998, respectively. After leaving the label, Martin set up Idaho Music (thanks to a car accident settlement) and issued the live People Like Us Should Be Stopped and Hearts of Palm in 2000. Seta left for 2001's Levitate, leaving Idaho as one-man act. A compilation of rare tracked entitled We Were Young and Needed the Money appeared in 2002. Idaho's latest release is The Lone Gunman, which was released in 2005.

In December 2008 Idaho contributed his song 'Santa Claus Is Weird' for a Christmas compilation called 'An Indiecater Christmas' which was put out by Indiecater Records.

and all there lyrics can be found here: http://www.slidingpast.com/lyrics/

The Broadcast Of Disease

You Were A Dick

We Were Young And Needed The Money