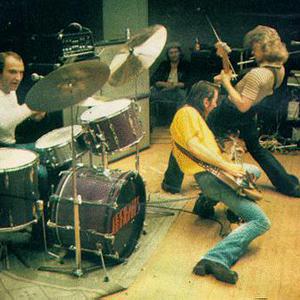 Hurriganes was a finnish rock trio formed 1971 in Helsinki, Finland by drummer /lead vocalist Remu Aaltonen. Band's first line-up featured bassist Cisse H&auml;kkinen and guitarist Ile Kallio. The latter was replaced by Albert J&auml;rvinen before their 1973 debut "Rock And Roll All Night Long", which sold over 25,000 copies in Finland and eventually went gold. In 1974 they released "Roadrunner", which is generally regarded as one of the greatest Finnish rock albums ever.

J?rvinen left the band in 1975, being replaced again by Ile Kallio. Albert J?rvinen did return to the helm twice afterwards, first replacing the departed Kallio in 1979 and later during their ill-fated comeback attempt in 1988. Ile Kallio on the other hand returned for another year in 1983, after Janne Louhivuori had left. Louhivuori had been with the band since 1981, when J?rvinen was unceremoniously fired after a disastrous gig, where he had been performing heavily under the influence.

After the band's demise in 1984 bassist H?kkinen fell on hard times and problems with alcohol led to his untimely death on December 26, 1990. His fellow bandmate J?rvinen didn't last much longer as he was found dead in a London hotel room on March 24, 1991. The legendary line-up of Remu Aaltonen, Cisse H?kkinen and Albert J?rvinen had reunited briefly for a string of dates in summer 1988, but old disagreements between J?rvinen and Aaltonen caused the former to be sacked midway the tour and he was replaced once again by Janne Louhivuori for the remaining few dates. The live album from the tour, Live at Metropol (released late 1988) had Louhivuori on guitar.

Kallio has had a successful career performing with his wife Kaija K&auml;rkinen, while Aaltonen resurrected the name Hurriganes in 2001. Other members have come and gone, the current line-up consists of Aaltonen, bassist Mikko L?ytty and guitarist Nipa Niilola.