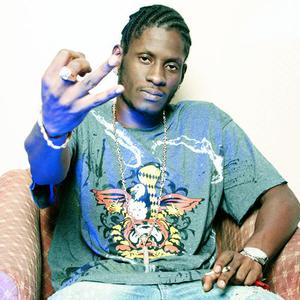 Hardcore and innovative aptly describe the persona of the artiste known as Aidonia. When scanning through radio stations it is impossible not to hear his songs. The ladies adore him and men give high ratings to the lyrical flow of Aidonia aka lyrical king. Born Sheldon Lawrence in1981, he is the second of four children for his mother a teacher and his father an ex-soldier. His close-knit family instilled in him his morals and values and from his friends he gained street knowledge. He attended Mona Heights Primary then moved on to Meadowbrook High School where his love for music began.

Born Sheldon Lawrence in1981, he is the second of four children for his mother a teacher and his father an ex-soldier. His close-knit family instilled in him his morals and values and from his friends he gained street knowledge. He attended Mona Heights Primary then moved on to Meadowbrook High School where his love for music began.

After watching a tape of Sting 1993 with the infamous clash between Beenie Man and his icon Bounty Killer his mind was set on becoming a deejay.

When he returned to school after that Christmas break he began re-enacting the clash for schoolmates and friends who immediately recognised his talent. Soon after he began writing his own lyrics and formed the J.A.G 1 (Jah A Guide) crew with friends. Jag 1 or J.O.P. (Jag One Productions) were often referred to when performing at school concerts and fetes.

A few years after leaving high school, Aidonia met Mr. G (then known as Goofy) and shortly after recorded his first single Many a Dem in October 2003. Shortly after he began working with Rod Pinnock of Orizen Entertainment. In early 2004, he became a popular performer at a weekly event called Battle Thursdays where he got some recognition and also had an opportunity to work on his performance skills.

Aidonia credits Mr. Pinnock for introducing him to the business aspect of the music industry by giving him the Business of Music book to read. This taught him that for an artiste, music is not only about recording and performing, but that the business aspect is also very important.

More recent singles include Chickenhead on the Galore riddim, Bookam on the Billbak riddim, Reload on the Redbull & Guinness riddim and Kingfish and Unknown Assailant on the Stick-Up riddim. Aidonia fulfilled one of his goals of working with Bounty Killer when he recorded Sen Fi Dem. He has been making a number of appearances with Killer since that time. One of his current singles Ooku has been pulled from the airwaves pending investigation by the Broadcasting Commission

Aidonia has performed throughout the island at popular shows at UWI and UTech, Chancellor Hall's Spectrum, Eclipse Pool Party, Lady Saw's Birthday Bash, Champions In Action, Spring Break in Negril, Fully Loaded, ATI 2006 and Sting 2K5 to name a few. Though a newcomer, he was a confirmed act at Reggae Sunsplash and Sumfest that both took place this summer.

There are no limitations on where he plans to take his career. Aidonia plans to develop himself as an artiste and keep putting in hard work in order to reap the benefits. He would like to work with producers such as Dave Kelly, Steelie & Clevie and Sly & Robbie and other dancehall artistes such as Shabba Ranks, Sizzla, Baby Cham, Vybz Kartel and Buju Banton, In the next five years he hopes to produce an internationally acclaimed album.

"I want to take dancehall music to the level that Bob Marley took reggae," says Aidonia.