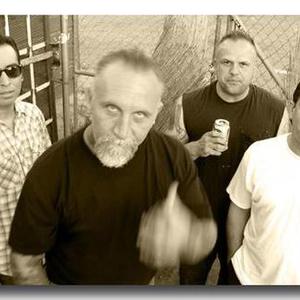 Hellbound Hayride has been a mainstay of the So.Cal. music scene since 1995. Their music has been described as a blend of roots based rock n' roll, country and blues with the rebellion and aggression of punk rock. Eddie Wilson the founder is a unique and gifted singer/songwriter. Eddie met guitarist Luis Ramos in 1993 and immediately struck up a friendship based on musical similarities and attitudes to compose a band unlike any other.

Eddie recruited long time friend and bass legend Mike Castellano who was a mentor to him for years before starting Hellbound Hayride. With this powerful front-end, Eddie knew the drummer would have to be dynamite and flashy. The only drummer who could handle this task was Carlos Nieto.
After 2 previous releases their Next stop was their local watering hole OC's infamous "Doll Hut". There they recorded a live show for their friends. This was in January 2002. After a much needed break, they received a call from Split Seven Records to release the live recording. In December 2002 "Who Shot The Hole In My Sombrero" was released. This catches Hellbound Hayride at home, raw and spontaneous, "doing their thing".