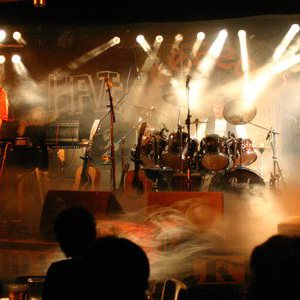 2) Haze is a house project by Sandy Rivera (Kings of Tomorrow). He had a huge club hit with 'Freak'.

3) Haze is a rapper from Sevilla (Andalusia, Spain). He released his last work at 2006 titled "El precio de la fama".

4) Haze were a German psychedelic and progressive rock band, active in the late 60s and early 70s. Their 1971 self-titled album is a complex progressive rock effort with many instrumental passages and a unique vocal delivery. It was later reissued on CD by the Second Battle label with special packaging.

5) Haze were a British progressive rock group. In the End: 1978-1988 is a compilation of material that did not fit into the "prog" mold. They had many of influences, though the dominant one is the early 70s UK sound, with traces of Genesis, Camel, Greenslade and others.

7) Haze is an English rapper affiliated with the group Eurogang

8) Haze (Vince Varga) is a hungarian DJ, VJ and media artist. He has his own show on the independent Radio Tilos in Budapest. More about his work on his homepage.

10) Haze is a Croatian Thrash/Black Metal band from Slavonski Brod. They have released in 2002. one demo named "Za Crna Srca". After that,they splited-up.

11) Haze is a dutch rapper from raalte. More on http://kelvint.hyves.nl/


12) HAZE is the funk band from St. Paul, Minnesota that wrote and recorded the popular song,"I Do Love My Lady" 35 years ago. Their second LP entitled HAZE II Resurrection was recorded only four years later and has been re-mastered and released in 2010 as a collector's edition! See www.myspace.com/hazebegins.

13) Haze-A New Age band from Warwick, RI. Haze blends punk, reggae, hip-hop, programming and electronics to create something entirely their own. They currently have 2 releases out. "The Demo" which is a full length, and "The EP" which is 8 tracks. more info at www.thathazemusic.com

Back To The Bones