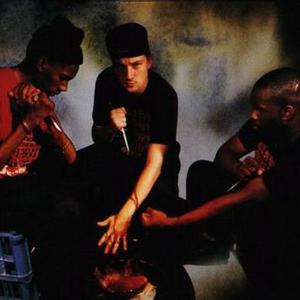 There are several bands with this name: 1.) Gunshot were a British hip hop group formed by MC Mercury, MC Alkaline, Q-Roc and DJ White Child Rix. They released their debut single "Battle Creek Brawl" (Vinyl Solution, 1990) to some acclaim, which was followed swiftly by the single "No Sell Out/Crime Story" (Vinyl Solution, 1991). Both singles were well received within the hip hop scene, but following this release Q-Roc left the group to join Son of Noise under the name Curoc.

They released their debut single "Battle Creek Brawl" (Vinyl Solution, 1990) to some acclaim, which was followed swiftly by the single "No Sell Out/Crime Story" (Vinyl Solution, 1991). Both singles were well received within the hip hop scene, but following this release Q-Roc left the group to join Son of Noise under the name Curoc. Mercury, Alkaline and White Child Rix continued with the group, releasing a succession of singles in 1991/1992 that soon cemented them a place as one of the leaders of the UK Hip Hop scene. Their style was hardcore and fast, quickly coming to be considered - along with groups such as Hijack - the defining style of the genre.

One of their releases in this period was "Killing Season/Nobody Move" (Vinyl Solution, 1992), which was the first of their tunes to feature guest vocals from the rapper Barry Blue. Blue continued to provide guest vocals on some tracks for the group right up until their final album, as well as releasing the White Child Rix produced "The Story Begins . . . EP" (Move, 1994) as a solo artist. Unfortunately, his solo career never took off.

The reception of Gunshot's first singles was good, and demand was soon growing for an album. The group released the seminal album Patriot Games, which soon became regarded as one of the defining albums of the British hip hop scene. More singles followed, including "Color Code" (Vinyl Solution, 1994) which featured remixes by Depth Charge - repaying the favour of Alkaline rapping for them on the "Depth Charge vs Silver Fox" (Silver Fox Records, 1991) single.

A second album was anticipated, and indeed the group were working on it for Vinyl Solution. However, there were problems and the album was never released. Instead, Vinyl Solution released a compilation of the highlights of the group's singles to date. This marked the end of Gunshot's association with Vinyl Solution, and the group went underground. They communicated with their fans via their now defunct website www.gunshotuk.com whilst they worked on getting a new record deal.

The fruits of this were another single and a new album - Twilights Last Gleaming (Words of Warning, 1997), which was well received but led to another long period away from the limelight as they worked on producing their second album - International Rescue (Words of Warning, 2000) - from the ground up. Again, the album was well received but failed to ignite the scene in the way that their earlier work did. Most notable on the album was the track "The English Patient", which included guest spots from some of the founding father's of the British scene - Blade, MC Mell'O', Huntkillbury Finn, Chester P and Icepick. The song bemoaned the current state of the British scene - at a time when new artists were starting to come up and get recognition nationwide.

The album was billed as Gunshot's final album even before it was released, and the group made good on that promise. In recent years, Alkaline has been guesting on tracks by artists such as Junior Disprol and Aspects. There is still hope within the scene that the group will reform, although as yet there is no sign of it happening.