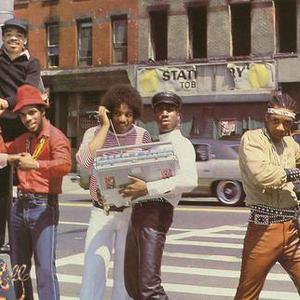 Joseph Saddler (born January 1, 1958 in Bridgetown, Barbados) better known as Grandmaster Flash, is an American hip hop musician and DJ; one of the pioneers of hip-hop DJing, cutting, and mixing. Grandmaster Flash and the Furious Five were inducted into the Rock and Roll Hall of Fame in 2007, becoming the first hip hop/rap artists to be so honored. Saddler's family migrated to the United States from the West Indies, and he grew up in the Bronx.

Saddler's family migrated to the United States from the West Indies, and he grew up in the Bronx. He currently lives in the Morrisania section of the South Bronx. He became involved in the earliest New York DJ scene, attending parties set up by early luminaries. Learning from Pete Jones and Kool Herc, he used duplicate copies of a single record and two turntables (for cutting) but added a dexterous manual edit with a mixer to promote the break (the ordinary playing of the record would be interrupted to overlay the break, the break could be repeated by using the mixer to switch channels while the second record was spun back). He also developed the technique initially called cutting, (which was developed by Grand Wizard Theodore into scratching).

Grandmaster Flash's parents played an important role in his interest in music. His parents came from Barbados and his father was a big fan of Caribbean and black American records. As a child, Flash was fascinated by his father's record collection, "My father was a very heavy record collector. He still thinks that he has the stronger collection. I used to open his closets and just watch all the records he had. I used to get into trouble for touching his records, but I'd go right back and bother them."[2] Murray Forman and Mark Anthony Neal's book That's the Joint describes how Flash's entry into "cutting" came from this fascination with his father's record collection as well as his mother's desire for him to educate himself in electronics.

Flash played parties and also worked with rappers such as Kurtis Blow and Lovebug Starski. He formed his own group in the late 1970s, after promptings from Ray Chandler. The initial members were Cowboy (Keith Wiggins), Melle Mel (Melvin Glover) and Kid(d) Creole (Nathaniel Glover) making Grandmaster Flash & the 3 MCs (with Melle Mel being the first rapper ever to call himself an "MC"). Two other rappers briefly joined, but they were replaced more permanently by Rahiem (Guy Todd Williams, previously in the Funky Four) and Scorpio (Eddie Morris, also used the name Mr. Ness) to create Grandmaster Flash and the Furious Five. Soon gaining recognition for their skillful raps, Grandmaster Flash and the Furious Five pioneered MCing, freestyle battles, and invented some of the staple phrases in MCing. The group performed at Disco Fever in the Bronx beginning in 1978. Cowboy created the term "Hip hop" while teasing a friend who had just joined the US Army, by scat singing the words "hip/hop/hip/hop" in a way that mimicked the rhythmic cadence of marching soldiers.

Grandmaster Flash and The Furious Five were signed to Bobby Robinson's Enjoy Records and in 1979 released the classic "Superrappin'". They later signed to Sugar Hill Records and released numerous singles, gaining a gold disc for "Freedom," and also toured. The classic "The Adventures of Grandmaster Flash on the Wheels of Steel," released in 1981 was the best display of Flash's skills (combining elements of Blondie's "Rapture," Michael Viner's Incredible Bongo Band's "Apache," Queen's "Another One Bites the Dust" and Chic's "Good Times." It also marked the first time that record scratching had been actually recorded on a record. The group's most significant hit was "The Message" (1982), which was produced by in-house Sugar Hill producer Clifton "Jiggs" Chase and featured session musician Duke Bootee. Other than Melle Mel, no members of the group actually appear on the record. Rahiem lip-synced Duke Bootee's vocal in the music video. "The Message" went platinum in less than a month. In 1982, Flash appeared in the movie "Wild Style" and sued Sugar Hill over the non-payment of royalties. The group split between Flash and Mel before disintegrating entirely. Flash, Kid Creole and Rahiem signed to Elektra Records and continued on as simply "Grandmaster Flash" while Mel and the others continued on as "Grandmaster Melle Mel & the Furious Five." In 1984, Mel released a 12" single, "White Lines (Don't Don't Do It)" which went on to become one of his signature songs. Although frequently credited on the records, Flash doesn't actually appear on "The Message", "White Lines (Don't Do It)", or many of the other Furious Five songs (if you don't hear scratching on a track, then Flash isn't on it). Mel notably appeared on Chaka Khan's "I Feel for You" becoming the first rapper ever to win a Grammy Award for "Record of the Year". He also appeared in the film "Beat Street" performing "Beat Street Breakdown" in the grand finale. Grandmaster Flash and The Furious Five reformed in 1987 for a charity concert, and in 1988 to release an album that did poorly. Melle Mel closed out the decade by winning two more Grammy awards for his work with Quincy Jones. There was another reunion, of a kind, in 1994, although Cowboy died in 1989.

Grandmaster Flash has a clothing line, "G.Phyre", and has signed a deal with Doubleday who will publish his memoirs. He hosts a show on Sirius Satellite Radio & he was recently presented with the BET "I Am Hip Hop" Icon award.

Melle Mel (now known as Mele Mel) has a clothing line with Sedgwick & Cedar. He released the children's book/CD/DVD "Portal In The Park" in November 2006 and he released his first ever solo album "Muscles" on January 30, 2007. The first single and music video is "M3 (The New Message)", released on the 25th anniversary of "The Message".

Grandmaster Flash and the Furious Five were the first hip-hop/rap group ever inducted into the Rock & Roll Hall of Fame on March 12, 2007 by Jay-Z. In 2008, he remixed the single "Into the Galaxy" by the Australian group, Midnight Juggernauts.