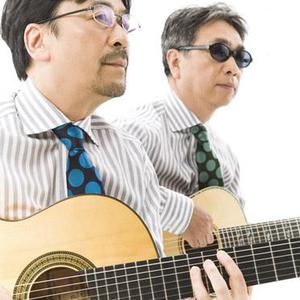 GONTITI (or ????) is a highly prolific Japanese jazz acoustic guitar duo, consisting of Gonzalez Mikami (???????) and TiTi Matsumura (????). The duo formed GONTITI in 1978 in Osaka, Japan and have since released over 30 albums both as a duo and as soloists, over the span of almost 3 decades. GONTITI has also released international editions of a few of their albums in countries outside of Japan, including the United States and Korea.

Although their music integrates a number of different styles, one of their primary influences is bossa nova. Over the past few decades, GONTITI's music has been heard on a wide variety of outlets, including Japanese TV (theme song performances, commercials, soundtracks, &c.), film, and also on the radio. The duo has been praised as "Japan's most unique adult contemporary sound" and their music acclaimed, "the most comfortable music on earth."

Activities in the last few years have included the December 2003 release of their milestone compilation titled, "25th Anniversary CD." In 2004, they performed the soundtrack music for critically acclaimed Japanese film "Nobody Knows" (or "??????/Daremo Shiranai" 2004). In 2005, they performed the soundtrack for the Japanese TV drama series, "Otona no natsuyasumi" ("???????").