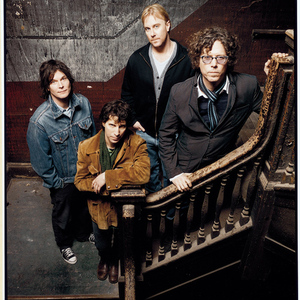 Golden Smog are a loosely connected group of musicians (arguably a supergroup) comprising, at various times, members of Soul Asylum, The Replacements, Wilco, The Jayhawks, Run Westy Run, The Honeydogs and Big Star. The group took their name from the name of a Flintstones character, which, in turn, was a parody of singer Mel Torme's nickname; the Velvet Fog. The group first came together in the Minneapolis area in 1989 as a country-rock reaction to the punk and hardcore music that dominated the Twin...

The group took their name from the name of a Flintstones character, which, in turn, was a parody of singer Mel Torme's nickname; the Velvet Fog. The group first came together in the Minneapolis area in 1989 as a country-rock reaction to the punk and hardcore music that dominated the Twin Cities' musical scene at the time; eventually Golden Smog became something of a fixture at local clubs, where they would play a handful of shows annually. Golden Smog's lineup has often changed, though Run Westy Run guitarist Kraig Jarret Johnson as well as guitarists Dan Murphy (Soul Asylum) and Gary Louris (The Jayhawks) were relative constants.

The definitive beginning of Golden Smog is hard to pinpoint given the mercurial nature of the band's lineup. Some point back to a show in January of 1987 when a band billed as 'The Take It To The Limit Band' played an all Eagles cover show at the Uptown Bar in Minneapolis. This band consisted of Dan Murphy and Dave Pirner (both of Soul Asylum), Jim Boquist (later of Son Volt), and Martin Zellar (Gear Daddies). The show ended with a cover of then Bangles hit song Walk Like An Egyptian. This same band later played a The Rolling Stones themed show in 1989 under the name "Her Satanic Majesty's Paycheck."

Between these early covers shows, and Golden Smog's first album, it is unclear what happened. It's hard to claim that these early shows were by Golden Smog, but rather in hindsight they were played in the spirit of the early Golden Smog. In 1992, Dan Murphy, Gary Louris, Marc Perlman (bassist for The Jayhawks), Kraig Johnson, and Chris Mars (the Replacements) released Golden Smog's first CD, a covers EP entitled On Golden Smog. This was followed four years later in 1996 by their full-length debut, Down by the Old Mainstream, recorded at Pachyderm Recording Studio with a lineup that included Kraig Johnson, Dan Murphy, Gary Louris, Marc Perlman, Wilco frontman Jeff Tweedy, and Honeydogs drummer Noah Levy (all of whom recorded under pseudonyms as a result of contractual obligations). A few years later the band reformed with Jody Stephens (of Big Star) taking over for Noah on the drums (Jody had previously played with the band during a New Years Eve show in Chicago in 1996). This new incarnation of Golden Smog released Weird Tales in 1998.

In 2005 a new incarnation of the smog formed and recorded a new album in Spain. The new album is entitled Another Fine Day and was released on July, 18th 2006 on the Lost Highway Records. This album features both Jody Stephens and Linda Pitmon from Zuzu's Petals on drums. This album, like the previous couple is of a more coherent band, although Jeff Tweedy is only featured on a few songs. In the summer of 2006, the Smog played a couple of shows in Minneapolis and New York City. These shows were without Tweedy, as he had previously stated that he was too busy to tour with the band. A six-show mini-tour occured in September of 2006. In 2007 Golden Smog released an EP on Lost Highway called Blood On The Slacks.

Blood On The Slacks

Down By The Old Mainstream