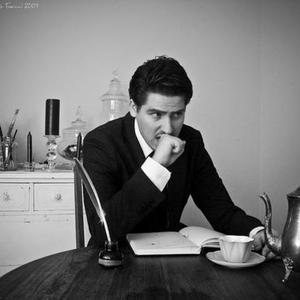 There are at least three artists known as Aetherius: 1. Aetherius is the performance name of independent electronica artist Rab Townsend, who hails from Toronto, Ontario, Canada. He has self-produced more than four albums worth of original material since 2001. His music combines stylistic elements of dark ambient, industrial rock, and downtempo, as well as film music, with an emphasis on melancholy moods and spacey atmospheres.

1. Aetherius is the performance name of independent electronica artist Rab Townsend, who hails from Toronto, Ontario, Canada. He has self-produced more than four albums worth of original material since 2001.

His music combines stylistic elements of dark ambient, industrial rock, and downtempo, as well as film music, with an emphasis on melancholy moods and spacey atmospheres.

Aetherius began making music at the age of 14 using the name Dj_StarChild. Through the OverClocked ReMix community, he was introduced to computer music and self-production.
This led to the composition and production of two albums' worth of piano driven ambient dance music entitled 'Multi-Coloured Breakfast' and 'Empty Box of Happiness,' the latter of which exposing a more experimental edge.
By 2004, after having changed his alias to "Aetherius," allowing for a change of influence and style, he composed and produced a third album entitled 'The Inevitability of Pain (and the stupidity of those who don't expect it)' which was a more structured, yet still experimental collection of piano driven ambient songs.
He immediately began work on his fourth album of original music, which is titled "An Experiment in Orbital Displacement." It showcases his affinity for found-sound layering, and guitar experimentation, and a development of his piano style into a more delicate, dreamlike atmosphere.
Throughout later 2007, Rab began working on an EP entitled 'FallPast EP', named for a song written shortly after the completion of the previous album. The EP is still a work in progress.
After taking a break for his post secondary education, additional production requirements and artistic changes of direction led to the addition of an all new song and plans to remaster older tracks from AEiOD in 2009.
In 2009, Aetherius produced three new songs. Two of which were used in conjunction with some older tracks as backing music for modern dance performances, while the third song was written as score for a short film.
Aetherius is currently working on remastering the AEiOD tracks, while writing and recording demos to be used in a future release. He is also a member of Horses About Men in what little spare time he has.


2. There is a Progressive rock/metal band called ?therius, who produced the album "All that I need to survive" in 2007.

In the multitudes of sapient beings that inhabit planet Earth, there exists a line. This line is not visible, nor tangible, but it exists. It segregates the generic, meaningless, and purposeless majority from those whose legacies live on in perpetuity. These are the people who have brought something unique to the proverbial table; something that stimulates the intellect while simultaneously provoking change. ?therius is the feeble and utterly hopeless attempt of four meaningless individuals to traverse this line; to shun the path laid before them by their ancestors; to say ?there's more to life than this.? The entities referred to as RMB, STB, DJG, and GSM are the medium through which ?therius' abstractions are shared with the population. From the vile and begrimed streets of modernity, they come into existence to represent the adolescent ambitions that were exterminated by the reality of today's society. They are but memories of an age when anything was possible and the distant future was only a day away. Any personal information relative to the four individuals mentioned prior is extraneous because the lives (lies) they lead outside of ?therius are not worthy of any further documentation. They simply invite you to listen?


3. There is a progressive trance artist called Aetherius, who produced the track "Symphony of Drums."

All That I Need to Survive