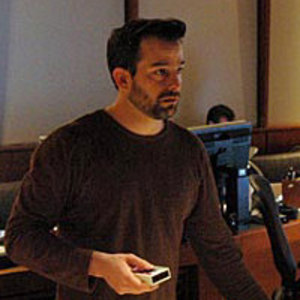 Geoff Zanelli (born September 28, 1974) is an Emmy winning composer working primarily in the medium of film and television music. His early career was notable for scoring additional music on roughly 30 film scores written by Hans Zimmer, Harry Gregson-Williams, John Powell, Klaus Badelt and Steve Jablonsky including Pirates of the Caribbean: The Curse of the Black Pearl, The Last Samurai, Pearl Harbor, Equilibrium and Hannibal.

He has since moved on to more solo work, including his 2006 Emmy-winning score for Steven Spielberg's miniseries Into the West, as well as the films Secret Window (co-composed by Philip Glass), House of D, Disturbia and Delgo.

Aside from film and television scores, Zanelli has also worked with recording artists, writing string arrangements for the bands Mest, Story of the Year, and for Robbie Williams. He has also been credited as a guitarist/bassist/synthsist on the song "I'm Not Dead" from recording artist P!nk.

Zanelli's experience led to working with British composer John Powell on his first Hollywood feature, Face/Off, directed by John Woo. Throughout the following years, Zanelli was called on as a composer and arranger for Powell on many feature films, including The Prince of Egypt and Forces of Nature. He later teamed with Harry Gregson-Williams and Powell to write additional music for Antz and Chicken Run. This led to more collaborations, this time with Hans Zimmer on Hannibal, the Golden Globe-nominated scores for Pearl Harbor and The Last Samurai and Pirates of the Caribbean: The Curse of the Black Pearl, as well as Pirates of the Caribbean: Dead Man's Chest.

He has since moved on to more solo work, scoring David Duchovny's feature directorial debut House of D, David Koepp's Secret Window and Steven Spielberg's Golden Globe Nominated Into the West for Dreamworks/TNT, which also received 16 Emmy nominations. Zanelli won an Emmy for his score for Into the West, one of two Emmy wins for the show.

The Odd Life Of Timothy Green