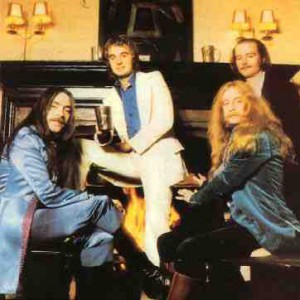 Formed in 1971, Fruupp were an early 1970s progressive rock band, which originated in Northern Ireland, but developed a fan base in the UK. They released several albums, including Future Legends (1973), Seven Secrets (1974), The Prince of Heaven's Eyes (1974), and Modern Masquerades (1975), were relatively popular, particularly on the student scene, and as a support group (Queen supported their tour including a live gig at Wembley Stadium in 1974) but never quite made into it the big time. Most of the artwork on their album covers was created by bassist/singer Peter Farrelly.

Most of the artwork on their album covers was created by bassist/singer Peter Farrelly.

Stephen Houston left the band in January 1975 and became a Christian activist, to be replaced by John Mason, who can be heard on their final album, Modern Masquerades, produced by King Crimson founder and multi-instrumentalist Ian McDonald, who also played saxophone on it.

The band eventually broke up in December 1976.

There were rumours at the end of 2006 of a possible reunion tour, including a statement by Stephen Houston on his website that he is: "definitely open to the possibility of a reunification tour if management, funding and the band members personal lifestyles could handle the upheaval."

It's All Up Now: Anthology CD2

It's All Up Now: Anthology CD1

The Prince Of Heaven's Eyes