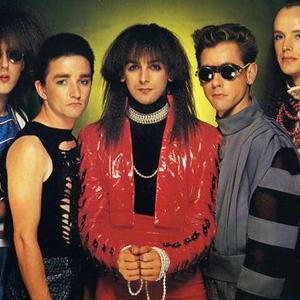 Freur was the name of the first band of Karl Hyde and Rick Smith, presently of the dance act Underworld. They had however previously released one single (entitled 'I Don't Like Cars') together in 1981 as The Screen Gemz. Formed 1982 in Cardiff, Wales by Karl Hyde, Rick Smith and Alfie Thomas, the band originally had only a graphic 'squiggle' for a name. In 1983, after recruiting John Warwicker and drummer Bryn Burrows, they struck a recording deal with a major label, CBS Records...

Formed 1982 in Cardiff, Wales by Karl Hyde, Rick Smith and Alfie Thomas, the band originally had only a graphic 'squiggle' for a name. In 1983, after recruiting John Warwicker and drummer Bryn Burrows, they struck a recording deal with a major label, CBS Records, and met the label's insistence on a pronouncable name with the compromise that the squiggle was pronounced "Freur".

Their first and only hit (number 59 in the UK charts), Doot Doot (1983), was typically 80's pop, with drum machine, reverse live drums and phased vocal. It was recorded/co produced by Alex Burak at The Point studio in Victoria, London, which was controlled by Rupert Merton of Point Music Publishing. Merton (who also had an early version of the Thompson Twins on his roster of artists) signed Freur.

The band's look was a cross between goth, rock, glam and new romantic - something that 80's chart terrorists Sigue Sigue Sputnik pulled off to better effect, not long after Freur had failed with it.

The band released five further singles after Doot Doot, between 1983 and 1985: Matters Of The Heart, Runaway, Riders In The Night, Devil and the Darkness and Look In The Back For Answers. All failed to dent the UK charts. Warwicker left the band in 1986 and Freur went into recess.

In total, the band released two albums: Doot Doot (1983) and Get Us Out Of Here! (1985). The second LP was only released in Germany and Holland but was finally compiled with the debut on a single CD released in October 2009 on Cherry Red.

In 1987, Hyde, Smith, Thomas and keyboardist Baz Allen signed to Sire Records under a new name, Underworld, and found minor success with the single Underneath the Radar (1988) before folding in 1990 after releasing 2 albums. This incarnation is now referred to in fan circles as "Underworld Mk.1", in the shadow of Hyde and Smith's later worldwide fame under the Underworld moniker as a leading electronic dance music tour de force.

Get Us Out Of Here