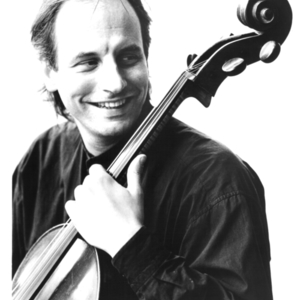 The first thing to know about Erik Friedlander is that he is a unique cellist whose work blurs genre borders. Is he a composer or improviser? Is this classical music or jazz? The LA Times put it best when they wrote, "Friedlander's performance clearly positions him as the first potential star performer on his instrument." Erik's dad was the noted art photographer Lee Friedlander, known best by musicians and jazz aficionados for the cover photos he took for Atlantic Records in the 60s.

Erik's dad was the noted art photographer Lee Friedlander, known best by musicians and jazz aficionados for the cover photos he took for Atlantic Records in the 60s. His passion for r&b and jazz greatly influenced Erik, whose earliest memories are of a household filled with the sounds of his father's subjects--Ray Charles, Aretha Franklin, McCoy Tyner, Ornette Coleman, and John Coltrane. Erik's been playing the cello since age 8, and we assure you that if you have a concept of what that instrument can do, he will reshape it.

Maldoror is Erik's first solo recording, though it's hardly a debut. He has toured Europe many times, released recordings on labels like ECM and Tzadik, and played with some of the biggest names in contemporary music, people like John Zorn, Dave Douglas, Laurie Anderson, and Joe Lovano. He's also accompanied pop acts ranging from Alanis Morissette to Courtney Love.

Erik came into his own in the 1990s as he became an integral part of NYC's downtown jazz scene. He played with artists like saxophonist John Zorn, tenor player Joe Lovano, and trumpeter Dave Douglas; he toured and recorded with two of his own groups, Chimera and the still-extant Topaz. Erik has played on records released on labels like Tzadik and Avant, receiving notices in publications like the Boston Globe, The Wire, and Billboard which wrote, "Friedlander [is] one of today's most ingenious and forward- thinking musical practitioners."