Envy On The Coast 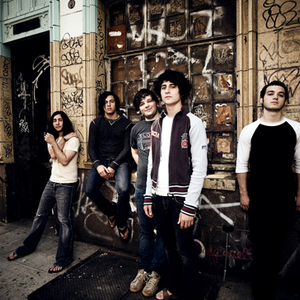 Two discouraged friends sat down and imagined what it would be like to play in band without gimmicks, without egos, and without facades. They wondered what it'd be like to play with people who shared in their desire to meet every kid, at every show, in every state they played. Without even making a conscious attempt to pursue this concept, they were fortunate enough to find three other friends who shared this desire. Within three years, Envy on the Coast was born. The original lineup consisted of Brian Byrne, Dan Gluszak, Jeremy Velardi, Ryan Hunter, and Sal Bossio.

The band had roots in the influential Long Island scene, having played everywhere from backyards to bar mitzvahs, to opening on huge tours with veteran bands like Taking Back Sunday. Their energetic live performances and the desire to extract all traces of the "rockstar attitude" from their music garnered them a huge fanbase, especially in the Northeast. Over time, the band has been fortunate to have met some people who have jumped aboard to help the band in ways that they couldn't for themselves. Bryan Russell, who engineered the band's first EP at his Brooklyn loft, passed the record on to Will Noon, who at the time played drums in Long Island favorite Straylight Run. Noon offered to help the band gain exposure to booking agents and record labels.

As the band grew frustrated and disgusted at being courted by the labels, they were fortunate enough to meet booking agent Matt Galle, who gave their record a listen and offered to help the band. Galle was the piece to the puzzle that Envy needed. He quickly befriended the band and saw eye-to-eye with their plan to tour incessantly, and made it happen. The band went on to release 2007's Lucy Gray, which saw the band having minor success with single, "Sugar Skulls" especially on networks like FuseTV, where the video aired in heavy rotation.

In 2009, drummer Dan Gluszak made a decision to leave, with the band offering a statement via Myspace: "We, as a band, have decided to part ways with our drummer, Dan. I can't overstate how much it pains me and the rest of the guys to have to announce the departure of one of our founding members but at the end of the day, we truly believe it is in the best interest of all parties involved to go our separate ways."

During 2010, the band released their darkest and deepest work, a full length entitled "Lowcountry" that drew on a number of musical influences, from metal to Southern roots and blues. It would be the last release the band would put out before announcing their split, which some speculate was due to growing frustrations and differences with the label over future success of the band.

In July 2010, Envy on The Coast announced their breakup with three final farewell shows, ending the band's six year run. The band stated in a message on their Facebook page that members Sal Bossio and Jeremy Velardi had approached the rest of the band, informing them of their impending departure. Vocalist Ryan Hunter stated in the message, "They explained that they are no longer happy being a part of this, and there was nothing Brian and I could do or say to change that. Because Envy on the Coast was founded upon the musical and personal relationships between the four of us, Brian and I have decided that we would rather move forward rather than finding musicians to replace Sal and Jer."

In a separate Myspace message announcing the final shows, Hunter explained that guitarist/keyboardist/vocalist Sal Bossio and bassist Jer Velardi had decided to leave the group, causing the band to decide it was time ?to pull that curtain down.? Hunter wrote, ?Brian and I decided a long time ago that we wanted to be artists. That can mean a lot of things, but to us it just means we want to keep making art and music together. And that's what we plan on doing. I doubt anyone's mentally ready to swallow ?what's next' yet, so we'll just leave it at that for now. In the coming weeks, we'll be announcing our three final shows and together, we will celebrate the death of something beautiful. Thank you all for being a part of this.?

Their sold out last show took place at NYC's Irving Plaza on August 28th, 2010. Byrne and Hunter have moved on to form North Korea, while Bossio and Velardi are reportedly working on new music endeavors.