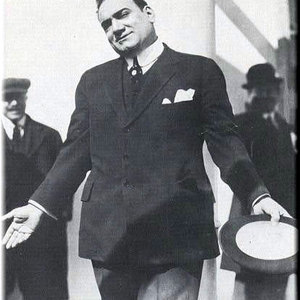 Enrico Caruso (February 25, 1873 ? August 2, 1921) was an Italian opera singer and one of the most famous tenors in history. Caruso was also the most popular singer in any genre in the first twenty years of the twentieth century and one of the pioneers of recorded music. Caruso's popular recordings and his extraordinary voice, known for its range, power, and beauty, made him one of the best-known stars of his time.

During his career, Enrico Caruso made nearly 260 recordings and made millions of dollars from the sale of his 78 rpm records. While Caruso sang at many of the world's great opera houses including La Scala in Milan and Covent Garden in London, he is best known as the leading male singer at the Metropolitan Opera in New York City for seventeen years. Conductor Arturo Toscanini, who conducted some of the operas that Caruso sang in at the Met, considered him one of the greatest artists he had ever worked with.

Caruso was baptized in the Church of San Giovanni e Paolo on February 26, 1873, having been born in Naples, Italy, one day earlier. He began his career in Naples in 1894. The first major role that he created was Loris in Giordano's Fedora, at the Teatro Lirico in Milan, on November 17, 1898. At that same theater, on November 6, 1902, he created the role of Maurizio in Cilea's Adriana Lecouvreur.

In 1903, with the help of his agent, the banker Pasquale Simonelli, he went to New York City, and, on November 23 of that year, he made his debut with the Metropolitan Opera as the Duke of Mantua in Verdi's Rigoletto. The following year Caruso began his lifelong association with the Victor Talking-Machine Company; his star relationships with both the Metropolitan and Victor would last until 1920. Caruso himself commissioned Tiffany & Co. to produce a 24 kt. gold medal with his profile, as a memento (PER RICORDO) for his friends of his Metropolitan performances.

Caruso was one of the first star vocalists to make numerous recordings. He and the disc phonograph did much to promote each other in the first two decades of the 20th century. His 1902 recording of Vesti la giubba from Leoncavallo's Pagliacci was the world's first gramophone record to sell a million copies. Many of Caruso's recordings have remained in print since their original issue a century ago.

On December 10, 1910, he starred at the Met as Dick Johnson in the world premiere of Puccini's La Fanciulla del West. His last performance at the Met was as El?azar in Hal?vy's La Juive on December 24, 1920.

Caruso died in 1921, from what is thought to be complications of pleurisy, apparently not diagnosed in time to save him. He was 48. He is buried in Naples.

Caruso was portrayed by Mario Lanza in a highly fictionalized Hollywood motion picture, The Great Caruso, in 1951.

In 1987, he was posthumously awarded the Grammy Lifetime Achievement Award.