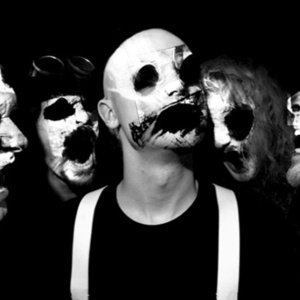 Enochian Crescent is a progressive and an aggressive Black Metal band that has always treaded its own path both musically and lyrically. The songwriting flourishes with a wealth of variation complemented with fierce and multifaceted vocal delivery. Despite this eclectic approach the band has good songwriting skills and an unwavering no-compromises attitude to keep things interesting and under control at every turn.

2010 The year kicks off with a mini-tour in Finland with Shining (Swe). Sixth album release, the six song NEF.VI.LIM shall be released in May.

2009 Tunturituuli & Vilhem are initiated and anointed as members. Preparing for the next great one, but the writing process is delayed because of life threatening injury and another heinous accident, more live shows, endorsement deal with Worna Guitars, signed up with Metalheim booking agency. Recordings for a new miniCD start with drums in December.

2007 Gigs, cultivating personal vices & songwriting. The amazing gatefold-vinyl version of Black Church is released by Hammer of Hate Records. Our first ever video for the song Ghost of Saturn is filmed and released.

2006 Third full-length album 'Black Church' is released worldwide in March and once again black metal is alive and not breathing. The album is supported by a series of enraptured club and festival appearances. The successful year was crowned with the Finnish Metal Awards nominations for 'best band' and 'album of the year' categories.

2003 Material for a new full-length album is composed. Three tracks for OBC Collection (EC's part of the cd is called 'Citizen Cain') and one bonus track for Babalon Omega re-release of Avantgarde era albums are mixed and mastered at Hellhole and Fantom studios respectively.

2002 Bolton (drums) completes the reborn and re-located (from Vaasa to Helsinki) line-up. New material is composed and four new tracks are recorded for OBC Collection and future considerations at Hellhole studio.

2000 'Omega Telocvovim' is unleashed upon the rest of the world. Recordings for the next album are planned for November, but both Michael (guitar) and Harald (bass) quit the band. Recording contract with Avantgarde Music is terminated by mutual agreement. The band makes all recorded material plus unreleased / hard to get specials available on mp3.com.

1998 Radiation Records, a division of Nuclear Blast, licences 'Telocvovim' for Europe. 'Babalon Patralx de Telocvovim' MCD is recorded in Kemi at Tico-Tico studio. Avantgarde Music signs Enochian Crescent and buys the rights to 'BPdT' from Woodcut Records. The band plays a couple of gigs and in November Avantgarde Music releases the MCD.

1996 Promotape 'Anno Bastardi' is recorded at Welmu Studio. It is released as a very limited cassette version by Woodcut Records that is quickly sold-out. Debut album 'Telocvovim' is recorded in Kemi at Tico-Tico Studio. A month prior to the recordings guitarist Anshelm decides to leave the band. He is immediately replaced by Michael who learns the songs quickly and makes an outstanding performance at the studio.