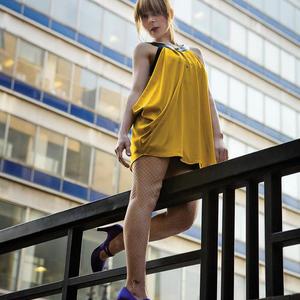 Ely Guerra is a pseudonym of Elizabeth Guerra V&aacute;zquez (aka Elizabeth Guerra V.), the daughter of Alberto Guerra and Gloria V?zquez, she lived the first few years of her life in Monterrey, where she was born, before moving to San Luis Potos? and then to Guadalajara, due to her father's work. It was in Guadalajara where she first discovered her passion for music. At the age of fifteen, the young Ely Guerra decided to follow her dreams and look for opportunities in Mexico City. It was there that she received a contract with BMG.

Two years later, she released her first self-titled album "Ely Guerra" and made her professional debut as a singer in 1992. However, the album did not have much success.

Ely Guerra later left BMG and signed a contract with another record label. With EMI, she released "Pa' Morirse de Amor" in 1997, along with the hit single "Angel de Fuego", and "Lotofire" in 1999, which was edited in the United States by Higer Octave. She also released the LP "4" in Argentina and Chile, which contained a compilation of the albums "Pa' Morirse de Amor" and "Lotofire", as well as her most recent production, titled "Sweet & Sour, Hot y Spicy" released in 2004.

Throughout her successful career, Ely Guerra has collaborated with artists such as: Jos? Fors, Fratta, La Ley, Quem, among others, and has also participated in the soundtracks for the films Amores perros, De la calle, and Vacas vaqueras. In addition, her picture next to Julieta Venegas appeared on the cover of Time magazine, introducing them as the most promising performers in the Mexican rock scene. Her latest album "Sweet & Sour, Hot y Spicy", released in 2004, contained the hit singles "Ojos Claros, Labios Rosas" and "Qui?reme Mucho."