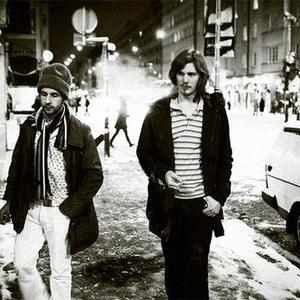 The Elope trio hail from Sweden and are on the same label, Gravitation, that's been bringing us those lovely Bjorn Olsson albums. They're a current, contemporary band but you'd be forgiven for thinking otherwise 'cause this record sure sounds like it was recorded no later than 1973, if it was yesterday. They've captured a long-ago, classic rock, heavily Beatles-influenced vibe, and written songs with pop brilliance to match. They're retro but not self-consciously, calculatedly so.

I mean, the album cover suggests indie rock along the lines of Death Cab For Cutie or Modest Mouse or something like that, way more than it does what the band actually sounds like. Which is the Beatles, Neil Young (they cover his "Bad Fog Of Loneliness"), a little country-Stones, a little Pink Floyd, maybe the Pretty Things circa their Parachute LP, and some Wings (or more Beatles). More obscurely, I'd say a lot of this has the same magical effect on me as do the albums by early '70s Peruvian Paul McCartney worshippers We All Together. Relaxed, super melodic, stick in your head songwriting.

Another kinda obscure comparison would be to the quieter, acoustic side of heavy British '70s rockers Budgie (!) who also were devoted Paul McCartney fans I'm sure. And, additionally, this has a restrained-but-effective hard/psych rock side to it that also could relate to the riffing of Budgie (a lot of critics apparently say Cream, but I don't hear that as much). Like the guy from Budgie doing their more sensitive songs, the intimate, gentle vocals here have an air of wistful melancholy I always find hard to resist. Pretty, exquisitely crafted songs that are so very seventies but also evoke the current folky indie-pop of, say, Belle & Sebastian.

I wasn't entirely surprised to find out that Elope apparently includes some member(s) of stoner rock band Lowrider. Indeed, Elope had a release (a split with a band called Backbiter) on the defunct Man's Ruin label some time ago, and have been called "possibly the mellowest stoner rock band ever", although they certainly are capable of rocking out, as on the track "Pride Approaching". They do it rarely but they do it well. But unlike a lot of 'stoner rock' bands, whatever inclinations they have towards psychedelic guitar jamming are balanced by the melodic/structural needs of the song at hand. So good. I know I'll keep spinning this for some time to come. Quite possibly top ten 2004 material as far as I'm concerned!