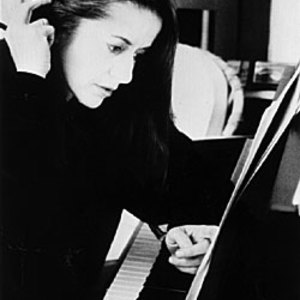 Eleni Karaindrou (Greek: &Epsilon;&lambda;?&nu;&eta; &Kappa;&alpha;&rho;&alpha;?&nu;&delta;&rho;&omicron;&upsilon;; French: El&eacute;ni Kara&iuml;ndrou) (b. 25 November 1939) is a composer of film music and classical music, with influences ranging from jazz to folk music from the Balkans and her homeland Greece. She is most famous for her long collaboration with the Greek film maker Theo Angelopoulos (Greek: ??????? ????????????), for whom she composed the soundtracks for films such as "Ulysses' Gaze" and "Eternity and a Day".

She was born in the mountain village of Teichio in central Greece and grew up in Athens where she studied piano and theory at the Hellenikon Odion. From 1969 to 1974 she studied ethnomusicology in Paris and, on returning to Greece, founded the Laboratory for Traditional Instruments at the ORA Cultural Centre. She has since been an active campaigner on behalf of Greece's musical resources.

Karaindrou has a long history of writing for film and theatre; to date, some 18 feature films, 13 plays and 10 television series have featured her music. Although most of her work has been with Greek directors she has also collaborated with Chris Marker, Jules Dassin and Margarethe von Trotta. Eleni Karaindrou has been associated with Theo Angelopoulos since 1982.

Her music is often minimalistic, always sombre yet warm, thoughtful and contemplative, reminiscent of the air, the sea and the life in her homeland Greece.

Eternity and a Day

The Suspended Step Of The Stork