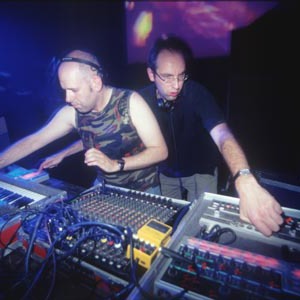 Acid Junkies is a dance act from The Netherlands. Live, they present themselves with a mix of solid techno music, played live and edited and enhanced with fragments of all kinds of dance music, spanning the last 20 years. From synthi-disco, via EBM towards house and techno. The Acid Junkies started in 1992 as producer Stefan Robbers' solo project. It was his way of saying 'thanks' to all the originators from Chicago that injected such large doses of psychedelia into house music.

The Acid Junkies started in 1992 as producer Stefan Robbers' solo project. It was his way of saying 'thanks' to all the originators from Chicago that injected such large doses of psychedelia into house music. The Part 1 EP on Eindhoven's famous Djax-Up-Beats label became an instant success and soon the Acid Junkies were a real band.

The first Acid Junkie is Stefan Robbers, one of the main artists responsible for turning the city of Eindhoven from Philips Light Bulb City into Techno City through his records as Terrace, Florence and REC and of course through his own Eevo Lute Muzique label.

His partner in crime for this operation is Harold de Kinderen, who provided Stefan with the Roland TB 303 he used for the first Acid Junkies EP and who has been a full band member since that day. Harold used to be a DJ for a drive-in show and played drums in various local bands. These days the band is assisted occasionally by Ronald Spanjers, who has by now earned the nickname "third Acid Junkie".
With Harold the Acid Junkies became a regular band, one that also performs on stage. Night after night they direct the crowd from behind their piles of analogue synthesizers on stage. The Acid Junkies can play an audience like one of their synths and can bring the biggest cynic into full-blown ecstasy.

And so the Acid Junkies became known as one of the best live dance acts throughout the world, with one exception. In their native Holland they were virtually unknown until a couple of years ago, when finally the Dutch gave up their fascination with foreign techno and embraced the Acid Junkies. Since then, they do there what they have been doing all over the world: play. They have performed live shows at just about every major rave in Europe, like Germany?s prestigious Mayday, as well as major Dutch festivals such as Noorderslag, Lowlands and Dance Valley. The band also conquered Chicago, where they shared the stage with their one-time heroes Roy Davis, Robert Armani and Woody McBride.