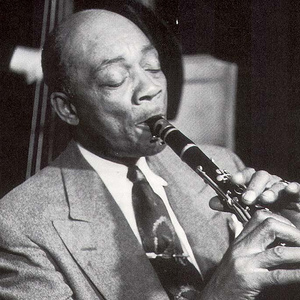 It took Edmond Hall a long period to develop his own musical individuality, but by the early '40s he had a very distinctive and dirty sound on the clarinet that was immediately recognizable within one note. One of four clarinet playing brothers (including Herbie Hall) who were the sons of early clarinetist Edward Hall, Edmond worked in many bands in New Orleans (including Buddy Petit's during 1921-1923) before going to New York in 1928 with Alonzo Ross. He was with Claude Hopkins' orchestra (1929-1935), doubling on baritone and only occasionally sounding like his future self on clarinet. Hall played with Lucky Millinder, Zutty Singleton, and Joe Sullivan, and had his style together by the time he joined Red Allen in 1940. He was with Teddy Wilson's sextet (1941-1944) and turned down an opportunity to be Barney Bigard's successor with Duke Ellington's Orchestra in 1942. In 1944, Hall began working with Eddie Condon (including appearances on his Town Hall Concert radio series), led his own group at Cafe Society, spent a few years based in Boston, and then during 1950-1955 was in the house band at Condon's club. Edmond Hall toured the world as a member of Louis Armstrong's All-Stars (1955-1958), worked in the 1960s now and then with Condon, and made his final recording (before his death from a heart attack) at John Hammond's 1967 Spirituals to Swing concert. He recorded as a leader for Blue Note (1941-1944), Commodore, Savoy, Storyville, United Artists, and some smaller labels.