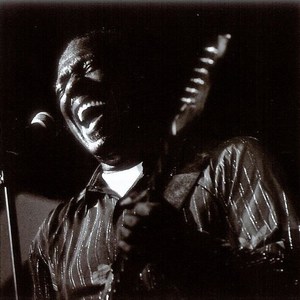 Born in Mississippi in 1939 and raised on Chicago's tough South Side, Eddie C. Campbell has played with nearly every seminal figure who defines Chicago Blues. With irresistible rhythms and lithe guitar lines, Campbell has a precise, clean, popping guitar tone played with uncanny precision. He is perhaps one of the best and most under appreciated Chicago blues guitarists playing today. Eddie's parents moved to Chicago when he was 6 and his mother bought him his first guitar at age 8.

By the age of 12 he was sitting in with Muddy Waters and while still in his teens he was playing around town with friends Luther Allison and Magic Sam. One of the more flamboyant players on the West Side, Eddie would wear outrageous hair styles and could often be seen riding around on a purple motorcycle with his bright red guitar strapped to his back. By the late '50s he was backing up Lowell Fulson, Percy Mayfield, Tyrone Davis and Little Johnny Taylor. He also played with just about every blues artists in the Chicago area at that time including Muddy Waters, Howlin' Wolf, Otis Rush, Little Walter, Mighty Joe Young, Oscar Coleman and Magic Sam who was influential on his guitar style. During the '60s and ?70's Eddie was band leader for Jimmy Reed (until his death in 1976). He then played with Koko Taylor and Willie Dixon's Chicago Blues All-Stars. In 1977 he released his now classic record, "King of the Jungle." After living in Europe for 8 years he returned to Chicago in 1992 and has attained blues cult status, with an international fan base, while he continues to be one of the best practitioners of his own unique brand of West-Side Chicago blues.

King Of The Jungle