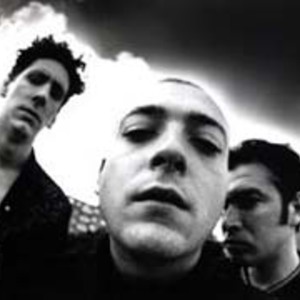 Dream City Film Club came together during the spring and summer of early 1995. I had been playing the North London gig circuit as a solo singer/songwriter for about 2 or 3 years when I met Laurence Ash and Alex Vald at the Bull & Gate in Kentish Town towards the end of 1994. They were promoting gigs there and must have seen something in my ragged drunken performances. Around April '95, Laurence's band, Furlined, had split up, so he was at a bit of a loose end.

We decided to play together informally at first. After a couple of weeks or so we invited Alex to play guitar. Alex was by no means a virtuoso, but we were struck by his unique approach.

During this time I had watched the demise of an excellent if inconsistent band named Breed. My brother urged an unemployed bass player to check out one of my solo performances. Enter Andrew Park. Whilst seeing some potential in our work, Mr. Park was worried by our shortcomings and was difficult to coax into the band at first. Eventually, we set to work arranging songs I had written such as "Porno Paradiso", "When I Sleep", "Vague", "Do Myself Harm", "Night of Nights", etc. Eventually we started writing together: "Pissboy", "If I Die I Die", "Filth Dealer". By July 1995, we had enough material to do a gig. I believe it was 31st July. We took the stage at the Bull & Gate for the first time under the moniker of Dream City Film Club.

Much has been made of our name and where it came from, but the truth is that very little thought went into choosing it. I had seen a report on local TV about a man who was convicted of an arson attack on an exclusive pornographic cinema (of which the arsonist was a member) in the Smithfields area of London. I found the story of a group of men burning to death in such a seedy establishment tragically comic. Around the time of the case coming to a close, we were booked to play but we had no name. The decision to call ourselves Dream City Film Club at first was a temporary one. Then it stuck.

We kept playing the North London circuit, improving gradually. Towards the end of 1995 we recorded some demos for Epic Records. Needless to say they were unimpressed with the way we had spent their corporate money.

In February '96 we played the Monarch in Chalk Farm. We blew the mind of Sean Worrell, who runs the mother of all underground fanzines, the Organ. Sean immediately wanted to put out a record for us. Our first release was a split 7' with Rhatigan (who was on the bill that night at the Monarch, along with Hefner). our side was called "Crawl". Later that year we recorded an EP for Organ. I guess it was around that time that Beggars Banquet became interested in us.

I can't remember when we signed to Beggars exactly, but I do know we started working on our first release almost immediately. The British press was pretty unanimous in its opinion of "Perfect Piece of Trash": "A discordant blob of sonic grease" and "pretty fucking horrible all told" were just two of the many charming things written about it.

We set about recording our debut album around October '96. Alex became ill during the session, but we didn't let this disrupt the recording process. The album was perhaps an over-ambitious effort, but no-one could pigeonhole it, and that suited us down to the ground.

In December '96 we recorded our first Peel Session at the Hippodrome in Golders Green. This time I was ill, but it didn't detract from the occasion.

The early part of '97 was spent touring England in support of "Perfect Piece of Trash", "Pissboy" and the album. We also played some dates with Placebo in France.

At the end of '97 we made an aborted attempt to record album no. 2. The pre-production for the proposed sessions was disastrous, and resulted in the band parting company with Alex. Undeterred, we released The Peel Sessions in April '98 and toured England, and also played some dates in Belgium.

Reconsolidated and confident in our ability as a 3-piece, we started recording what was to be In the Cold Light of Morning. In my opinion, it's a much more focused album than the first, but without compromising our ideal that our music should encapsulate the extremes of emotion and expression.

In February '99 we recorded our second session for the John Peel show, including 3 new songs: "Licking the Bone", "Gideon Blues", "Dirty Little Cherub", and covered John Cale's "Close Watch" along with an old gospel song called "Nobody's Fault But Mine".

In The Cold Light Of Morning