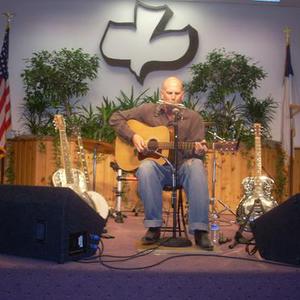 Donnie V, born 1962 in Peoria Ilinois. He was raised in church where he began singing and playing guitar. In the 1980's he formed the Christian Band Outcast. After leaving his walk with the Lord he began playing Blues in coffehouses, bars, & festivals where he opened for John Mayall, Jimmie Vaughan, Canned Heat & many others. Through the prayers of his wife Leonetta he has returned to the Lord and has been performing Christian Blues as a solo acoustic performer. Main Influences are Son House, Skip James, Robert Johnson, Lightnin' Hopkins, John Hammond

Donnie & Leonetta now live in Ca. where they attend Calvary Chapel and are the proud parents of their beautiful daughter Kellee!
They now travel and share music wherever God opens the doors!