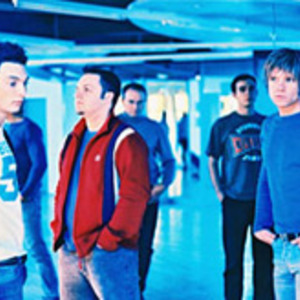 1 - A Deerfield, IL based band made up of 3 members: 2 Jews and 1 Christian. 2 humans and one squirrel/Jew hybrid. 3 foreheads, one of which weighs 80 lbs. A Chuckerman played bass. A Beringer played guitar. An Oliff stroked it to Alli Bloom, and repeatedly jumped while holding a guitar. Their music changed the world for almost 4 band practices. The band has been on a prolonged hiatus, but rumors of a comeback tour have been circulating for almost a decade. Their fans wait with bated breath, cherry tomatoes, and matzoh, for their dramatic return.

2 - Old-school dark electro band from Germany. They made some nice tracks in the 90ties like eg. "Died In A War" and I believe 2 albums (?) in the dark EBM and eloctro styles....

2 - Punk Rock and RolflLLLal band from Las Vegas, NV that split up June '06. 2 went on to be in Lydia Vance. Sources say the other got abducted by aliens or something (No, really).

3 - Dutch rockband from Leiden, The Netherlands that made name by TMF. Have been around for 8 years now and still try to claim fame.

4 - Absent Minded is a Swedish Hip-hop group consisting of the rapper ADL (Adam Den Lille) and the producer Vladi C. They dropped the album "Extreme Paranoia in Stocktown" and a couple of Singles and EPs.
5 - Canadian hip-hop artist.