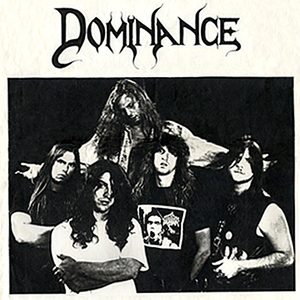 The History of Dominance starts in autumn 1992 when the band was funded by drummer Davide Tognoni. Line-up was consolidated in 1995 with the moniker Dominance. After recording a demo-tape in 1997 the band signed a contract with Lucretia Records International. Dominance recorded the first full-length CD in 1998 but, due to saome issues with the previous label they signed a new contract with Scarlet Records. In the beginning of 1999 the debut album Anthems of Ancient Splendour was finally released, gaining great success and lots of

positive reviews all over the world. Which the band relentlessly supported with
several shows (among the others with Malevolent Creation, Krabathor, Suffocation
, etc...). During the following years the band had new line-up and label
problems, but, in 2004 the band was ready for playing live. In october 2008
Dominance entered the studio to record theri long-awaited come-back album
'Echoes of Human Decay' released through Kolony Records.