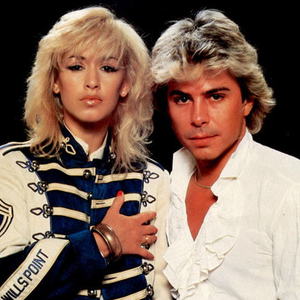 Thereza Bazar and David Van Day (previously members of Guys and Dolls) formed Dollar in 1978 making an instant impact on the charts with their first single Shooting Star. They enjoyed a successful chart career over the next ten years selling over ten million records worldwide. They spent over 120 weeks on the UK charts alone with classic pop songs including Who Were You With in the Moonlight, Love's Gotta Hold On Me, Hand Held in Black and White, Mirror Mirror (Mon Amour), Give Me Back My Heart, Videotheque, O L'Amour and many more.

Dollar are without doubt one of the most successful duos in pop music history.

We Walked In Love (The Arista Singles Collection)