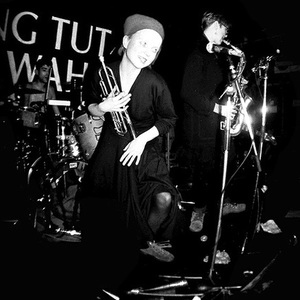 The Dog Faced Hermans was a five-piece band whose style could be described as anarcho-punk incorporating folk and noise influences as well as unorthodox instrumentation. Formed in Edinburgh, Scotland in 1986 but later operated in Amsterdam. Disbanded in 1995, members of the Dog Faced Hermans moved on to other notable projects including the Canadian ensemble Rhythm Activism and Holland's The Ex, with whom they collaborated and were closely affiliated. Of their albums, the only ones still in print are Bump And Swing and Those Deep Buds, on San Francisco's Alternative Tentacles label.

Mental Blocks For All Ages