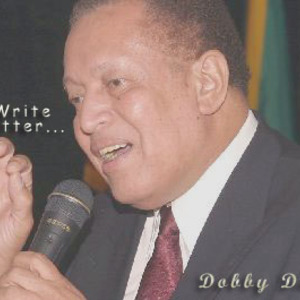 Legendary singer Dobby Dobson, born Highland Ralph Dobson, began singing in the early 1950s. Though his career started in his native home, Jamaica he is now renowned worldwide. He has appeared all over the Caribbean, South, Central and North Americas, Canada and The United Kingdom. This talented performer has become famous for his stirring performances that always leave the audience begging for more and make the ladies scream with delight. Dobby's talents knows no boundaries, in addition to singing, he is also a gifted songwriter, producer and actor.

Dobby's career began while he was attending Central Branch School in Kingston, Jamaica. His most famous acting performance was when he had the lead role in Ali Baba and the 40 thieves; his wife being played by Madge Sinclair of Trapper John M.D fame. Dobby later competed, as a member of ?The Twilights' in the highly recognized talent show called the Opportunity Hour hosted by Vere Johns.

While at Kingston College he composed his first song "Cry A Little Cry" and recorded It with his friends Howard Barrett, Fuzzy Byfield and Dennis Gayle, who were all students in the Delta Stream at Kingston College, hence the name Dobby And The Deltas. Dobby and Chuck Josephs (know as Dobby and Chuck) went on to record a series of hit songs in quick succession namely: Sweeter than Honey, Du Du Wap, Cool School, I Love My Teacher, and Oh Fanny.

As a result of his growing popularity he went on to pursue a solo career in the 1960s recording a string of hits such as Loving Pauper, Trouble Jim (Duke Reid), Seems to me I'm Losing, Ride Mi Donkey(Sir Coxson), Wonderful Sound, Endlessly, Strange, What Love has joined together (Rupie Edwards), Sweet Dreams, Muriel, and Oh Donna (Federal Records).

In addition to his solo career Dobby Dobson was also busy being the lead singer for several bands including The Sheiks, The Virtues, Kes Chin and the Souvenirs, The Granville Williams Orchestra, Charles and The Teddy Boys, Inner Circle and Fab 5.

Dobby is an avid songwriter, Loving pauper, Seems to me I'm loosing, Sweeter Than Honey, are just some of his original songs, many of which have been covered by international artists, such as Bob Andy and Marcia Griffiths, UB40, Freddy McGregor, Gregory Isaacs and others. His early composition of ?Du Du Wap' has been included in many documentaries tracing the origin of Jamaica music.

When he wasn't composing and singing, Dobby was busy producing music. He is credited with producing Barrington Levy's first single ?Fi Mi Black Girl', the Meditations first and second albums, and Dobby's own best selling album History for Lovers. In addition to his busy music career, Dobby was also employed at the Gleaner Company, as a proof reader, at The Ministry of Labour as a labour officer in charge of recruitment of workers to Guantanamo Bay. He was also a brand manager with Colgate Palmolive and later became the Caribbean Brand Manager for Cadbury Foods (JA), Limited.

In 1972 Dobby migrated to New York, where he continued to record charts topping records of the time including ?Mexican Divorce?, ?Harry Hippie?, ?Can I Trust You?, ?Hide Under The Bed? and a brand new version of ?Loving Pauper?. He also recorded a number one song ?Words' for Germaine's Penthouse Label.

He Knows My Heart

Those Days Are Gone