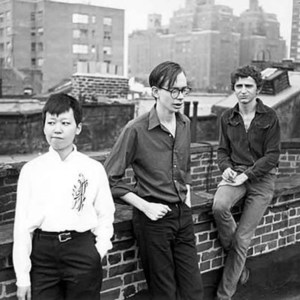 1) DNA were a New York based no wave band, formed in 1978 by guitarist Arto Lindsay and keyboardist Robin Crutchfield. Rather than playing their instruments in a traditional manner, they instead focused on making unique and unusual sounds. Their music was described as spare, noisy, and angular and was compared to some of Captain Beefheart.
DNA originally consisted of Lindsay, Crutchfield, Gordon Stevenson, and Mirielle Cervenka, and took their name from a song by another no wave band, Mars. Stevenson went on to play bass for Teenage Jesus and the Jerks; Cervenka was the younger sister of Exene Cervenka of X. This incarnation of the band was very brief, not playing even one concert. After the rapid departure of Stevenson and Cervenka, Lindsay and Crutchfield hastily recruited Ikue Mori -- a Japanese woman with little command of English and no drum set -- to be DNA's drummer.
This lineup of DNA played occasionally at CBGB and Max's Kansas City and recorded one 7" single. Within their first year, they had cemented their reputation as a paradigmatic No Wave band when Brian Eno selected them as one of the four groups documented on the No New York LP, the first recording to expose No Wave groups to an audience outside of lower Manhattan. The other three bands appearing on this album were The Contortions, Teenage Jesus and the Jerks, and Mars. No Wave was, of course, a movement against new wave.
Shortly after the recording of No New York, Crutchfield left DNA to form a new band, Dark Day. He was replaced by Tim Wright, previously of the Cleveland band Pere Ubu. As Wright played bass guitar and not keyboards, and was the only member of the band to have any conventional instrumental technique, the change in DNA's sound was dramatic. The music became even more spare and angular, with Wright's bass lines creating a sometimes menacing sound to support Lindsay's scraping, atonal guitar and Mori's irregular rhythms. Their song structures became tighter, briefer, more abstract, and have been compared to haiku.
The Lindsay-Mori-Wright lineup of DNA developed something of a cult following between 1979 and 1982, but perhaps more of their fans came from the art world than from rock audiences. Live shows were frequent in this period, but rarely outside of the CBGB - Mudd Club - Tier 3 circuit in lower Manhattan.
The group's 10-minute debut album, A Taste of DNA was recorded for Kip Hanrahan's American Clave label, and was later released on Rough Trade in 1980. Some live DNA tracks appeared on compilation albums while the band was still in existence.
Lindsay, Mori, and Wright decided to dissolve the band in 1982.

2) DNA was a British electronic duo consisting of Neil Slateford and Nick Bratt active from 1990 to 1998. Occasionally also known as The DNA Disciples, they are best known for their hit remixes of "Tom's Diner" by Suzanne Vega and "The Mummers' Dance by Loreena Mckennit.

3) DNA's fresh, vibrant sound comes to you from best friends Dan Book and Alexei Misoul. Prior to forming DNA, the band members individually performed in front of over 60,000 people, released multiple records and toured the U.S. extensively. Their debut self-produced album ?Passenger? shows their diverse influences. From Baltimore to Los Angeles and the Bahamas to Europe, Dan and Lex traveled looking for beautiful scenery to inspire their sound. The album allows listeners to share in the band's experience of taking their music with them wherever they go. ?Passenger? was written over a two year period, and reflects the band's commitment to the unsigned DIY method of recording, promotion, and marketing. Dan and Lex play all of the instruments on the album, permitting the creativity a traditional band doesn't allow. Viewing the band's live show allows the audience an experimental experience based on the album's non-traditional instrumentation. Support from a third member, Dru DeCaro, fills out the live sound and completed the line-up as DNA plan to tour the country in support of ?Passenger.? ?Passenger,? mixed by Zack Odom and Kenneth Mount (All Time Low, Cartel) is out now. .

4) DNA is an Isreali trance music duo. They describe their music as "psychedelic-trance". Band-members include Eitan Tanami and Zeev Kardonsky. http://www.myspace.com/dnatrance

5) DNA is a Kenyan rapper, produced by Jomino Entertainment. He raps in the "Genge" style found in Kenya (mainly Nairobi). His music is a combination of Swahili and English (the street language of Kenya called "sheng").

6) DNA (a.k.a. DJ DNA) was a DJ and Producer, who produced Happy Hardcore and Drum & Bass
Discogs link http://www.discogs.com/artist/DNA+(2)

8) DNA is a pop punk band from Amersfoort, The Netherlands, one of the first signings by Stuck In A Day Records. Released two cd's and then split up. Singer Bart van Dalen later played in NIRC and Findel and is now lead singer of Only Seven Left. Bass player Dirkjan van Oord later played in Five Years Later and Snatchin' Jenny and now plays bass in Diesel Disko.

10) DNA is a rapper from Finland. http://www.myspace.com/musichooddz

11) DNA is a rapper from Queens, NY. He has battled in Grindtime and URL and is a top tier NY battle rapper. He just released his first EP called "The Future Is Now" featuring Lotta Zay, Cortez, Skye, Ginuwine and more. http://twitter.com/DNA2k10 http://www.myspace.com/dna111 http://www.facebook.com/ericstjohn

12) DNA is a hip-hop band from Cyprus. The band DNA (Dimiourgoi Neas Antilipsis) was created around 2002 by Andreas Constantinides (MegaHz) and Theodoros Varnava (Decayer), now 24 and 19 years old respectively. Based on their mutual love for music and their extensive knowledge of especially on hip-hop music, the two men took the decision to create a hip-hop group in Cyprus that would make a difference since it would concentrate on real hip-hop with qualitative sound and serious lyrics. Their aim was to gain fans that not only loved hip-hop, but fans that appreciated good music and were of all ages.
www.myspace.com/dnantilipsis

Let Me Feel What You Need (Single)