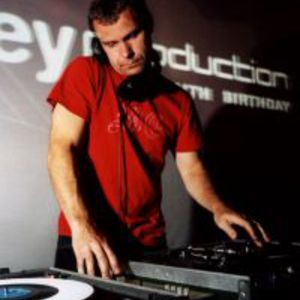 There is more than one artist with this name (for the russian punk band, see ??): 1) DJ, music maker, radio producer and presenter, Darren Knott (alias DK) is a key component in the Ninja Tune live shows and one of the main driving forces behind the legendary 'Solid Steel' radio show. In 2001 he released the 'Solid Steel presents' Mix CD on Ninja Tune alongside DJ Food and toured on 4 decks with Strictly Kev (DJ Food) throughout the UK and the World.

1) DJ, music maker, radio producer and presenter, Darren Knott (alias DK) is a key component in the Ninja Tune live shows and one of the main driving forces behind the legendary 'Solid Steel' radio show.

In 2001 he released the 'Solid Steel presents' Mix CD on Ninja Tune alongside DJ Food and toured on 4 decks with Strictly Kev (DJ Food) throughout the UK and the World. The Solid Steel mix CD was critically acclaimed achieving compilation of the year in Q, DJ Magazine, Time Out and Seven plus compilation of the month in Jockey Slut and Dazed & Confused.

Previous tours also include the well received US Tour with Coldcut and a European Tour with fellow Ninja artists Kid Koala and PC (DJ Food). DK has teamed up with Ninja Tune on various gigs, DJing both nationally and internationally, from spinning vinyl in a steaming hot turkish bath in Hungary, atop a cold Swiss mountain and in amongst an unexpected riot in Greece (opening up for the Prodigy), to name but a few.

The London gigs have included all the regular Ninja club nights including the famous Blue Note night 'Stealth' and 'Kungfusion' at the 333 . DK was also a regular at the recent Xen Solid Steel nights at Cargo.

Regular presenter and producer on Coldcut's infamous Solid Steel Show, formerly on London's Kiss FM Radio and BBC London he has been instrumental in syndicating the show to over 30 radio stations worldwide. Along with Coldcut and DJ Food, DK continues to broadcast possibly the best mix show on the airwaves.

Studio work has included the track Arcane by Arc on the Xen Cuts compilation and remixing Timber for Coldcut, a remix for The Cinematic Orchestra and various releases on independent labels.

A frequent visitor to the New York music scene, DK rates this as being a great influence along with a grounding in London's club history. Extensive travel and committed 'diggin in the crates' enabled a large and diverse collection of records to be amassed from different countries, which is reflected in his selection of tunes. His Djing style is an eclectic mix from Jazz induced beats to Drum & Bass, Hip Hop, funky breaks and beyond, trying to avoid a night of just one style of music and leaving room for both the latest tunes and classic rarities.

DK honed his MC skills in his native city of Baltimore, Maryland and at the age of 15 astonished and entertained music executives and fellow hip hop/r&b artists while interning for the 2002 Billboard R&B/Hip Hop Awards and Conference in South Beach Miami, Florida.

Prior to interning for the 2003 Billboard R&B/Hip Hop Awards and Conference, DK graduated from high school and released his debut full-length CD, entitled ?That's My Boy.? The music from "That's My Boy" blasted the airways throughout the Hip/Hop Conference and the title song was tracked as the #3 most added hip hop single on the CMJ chart for the week of March 10, 2004. ?That's My Boy? eventually was added on over 150 college and commercial radio stations in 2004.

While pursuing a BA Degree in Communications over the past four years, DK has performed at various events in the Maryland & DC areas, appearing with Slum Village, The Clipse, Cee-Lo, Raheem DeVaughn, Fertile Ground, and Ty Tribbett.

DK recently opened for The All American Rejects at Byrd Stadium in College Park, Maryland. DK also has appeared as a panelist and performer at various hip hop symposiums.

The spring of 2007 finds DK graduating from college and putting the finishing touches on his much anticipated sophomore release, ?Tha Firelane Project.?