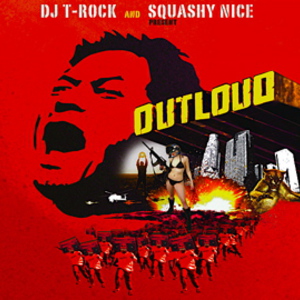 This multi-talented duo first hit the scene with the hit Mama Said (Wear You Out) from their partnership debut album Rock & Squash Techniques, which Real Groovy magazine named as one of the top five albums of 2005. DJ T-Rock & Squashy Nice (AKA Rock & Squash), are back October 2007 and into 2008 with their second album OUTLOUD. OUTLOUD features respected special guest DJ's and MC's including I Self Devine from the popular RHYMESAYERS family, Mr. Dibbs (who became EL P's DJ of DEF JUX), AZEEM plus many more multi-talented friends.

OUTLOUD features respected special guest DJ's and MC's including I Self Devine from the popular RHYMESAYERS family, Mr. Dibbs (who became EL P's DJ of DEF JUX), AZEEM plus many more multi-talented friends.

While the 25 track strong album is more hip-hop than the last one, the style hasn't changed too drastically - the pair have still managed to maintain those choppy, rhythmic, drum patterns reminiscent of the Rock & Squash Techniques album.

The albums first single titled Ho Really has an accompanying video starring DJ T-Rock and EROS (the MC and actor), and is the story of two men walking along the street in opposite directions. These pedestrians clash and are forced into a dance-off in order to decide who has the right of way. Directed by DJ T-Rock, the clip and a number of tracks on OUTLOUD are reflective of the duo's background working in the film & television medium.

OUTLOUD's second single Men Are Scarce, is a political anthem which asks the question, what the hell are we fighting for (?); a look at the current U.S. military involvement in Iraq and exploring the possibility of mankind destroying itself through pointless fighting. The clip was directed by Larry Morris (of the Cartoon Network) and features T-Rock and Squashy Nice as the last two men on planet Earth with homage to 70's sci-fi movie classics such as Planet of the Apes and Logan's Run. Animated zombies have taken over!

Southern born, LA based DJ T-Rock, ever since the late 80's, has been spinning vinyl throughout the US, Canada, Europe, and NZ, has released a number of solo and collective albums, TV commercials and soundtracks, and has acted in numerous TV and film productions. Currently, between live gigging and recording, DJ T-Rock is producing music for the Cartoon Network, MTV, and other television and film broadcasts. Along with the sought after and style distinctive Producer Squashy Nice, the duo have created an album they are both very happy with. "We wanted to make this album for us, because hip-hop is what we grew up on...it's how we began, and it's how we'll end. OUTLOUD took us over a year and a half to finish but we are completely satisfied and proud of the end results. It's music to (T-) ROCK your ass off to!"