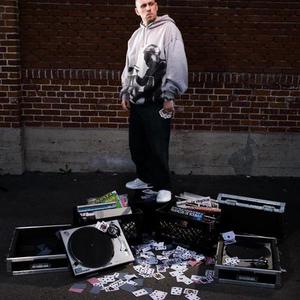 DJ Revolution is a Los Angeles native mostly known for his DJ residency with Sway & King Tech on their nationally syndicated hip-hop radio exhibition called The Wakeup Show. He had a hand in the production and scratching on Styles of Beyond's debut album, while releasing his own, entitled R2K v1.0, in 1999. A year later saw him release his next full-length effort, In 12's We Trust. source: allmusic Biography by Brad Mills

Originally from Long Island, New York, DJ Revolution relocated to Los Angeles, California, after he received a position of being resident DJ at the most syndicated hip-hop radio show in the world, The Wake Up Show. Since he's the DJ of the Wake Up Show, he's able to reach 12 million listeners weekly. Therefore, he's the most listened to DJ in the world.

"In 1984, my grandfather built me my first mixer. And after I touched the turntables, it was on!" said DJ Revolution. Some of the DJ's that inspired Revolution to become a DJ are: DJ Red Alert, Joe Cooley, Cash Money, and Jazzy Jeff.

After hearing these DJ's in action, collecting records became a big part of Revolution's life. Ever since DJ Revolution started his career as a DJ, he has held production credit for such artists as Rasheed & Ill Advised, Styles Of Beyond, and several others.

In addition, Revolution produces various anthems for the Wake Up Show which are aired every time the radio show is on. He's made many cameo's with artists such as Red Foo & Dre Kroon, Other Wise, Dilated Peoples, Planet Asia, and several others.

So, he already has done a huge contribution to putting out dope work. Revolution used to be the mix radio show music director at 92.3 The Beat and also used to work at Ground Level. So, he's done a lot of work in the music industry in the last few years.