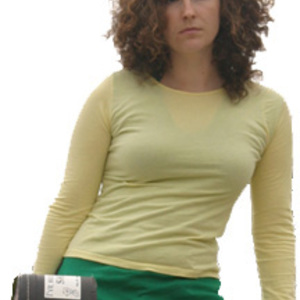 Abi Tapia smiles big when she sings. She can't help it - she's having so much fun. But in the world of independent music, where it's hip to be tortured, she sometimes feels like a Pollyanna. Abi undoubtedly gets her optimism from her mom who was expelled from Catholic School for being pregnant with her, but called it "the best day of her life." Abi's first fifteen years were a blur of Southern towns and yearly uprooting as her mother chased work and higher education, eventually earning her Doctorate in Music and a job as a college professor.

Abi undoubtedly gets her optimism from her mom who was expelled from Catholic School for being pregnant with her, but called it "the best day of her life." Abi's first fifteen years were a blur of Southern towns and yearly uprooting as her mother chased work and higher education, eventually earning her Doctorate in Music and a job as a college professor. But the constant moving was presented as a big adventure and instilled in Abi the idea that new places have potential for happiness, discovery and success. So she kept moving.

Following her nomadic childhood she attended college in Iowa, where she was a Sociology major at Grinnell College, and began her professional music career while living in Portland, Maine. But Abi found herself attracted to the sweet twang and straightforward approach of country music so she migrated to Austin, Texas in 2002, where she quickly rooted herself in the city's thriving live music scene. With its blend of country sincerity, cosmopolitan snap and plethora of skilled pickers, she continued maturing and developing her own style. Along the way she picked up awards and recognition for her songwriting from The Wildflower Music Festival, Austin Songwriters Group and the Kerrville Folk Festival.

The inviting warmth of the South, the expansiveness of the Midwestern Plains, the pluck and determination of a New England Yankee and a Texan's independent spirit all come together in Abi's "wanderlusty" music (a term she proudly displays on her guitar strap).

Tapia's 2005 release, One Foot Out The Door, a driving collection of songs about loving and leaving produced by multi-instrumentalist Chris Gage, compelled The Austin Chronicle to comment that "the dozen confidently written songs weave tales of a woman assessing life and love with an uncompromising eye and sometimes bittersweet results." Featuring the hot playing of Kym Warner (mandolin) and Eamon McGoughlin (fiddle) from acclaimed group The Greencards, the CD rose to the Top 40 on Americana radio.

bi chased the music around the country, playing legendary listening rooms like Club Passim, The Bitter End, The Bluebird Caf? and Eddie's Attic, while other nights she sang her heart out in crowded living rooms, libraries, or under a gazebo on a sprawling Texas ranch. Her songwriter's sensibility allows her to appreciate the details and subtle differences of each place she visits and offers potential adventure and inspiration. That inspiration led to 12 new songs and Abi Tapia once again called on Chris Gage to produce.

2008's The Beauty in the Ruin explores sadness and frustration, which after 8 years of the starving artist's life Abi had plenty of, but there is a common thread of hope, redemption and joy in all of these supposedly sad songs. It is full of sing-able hooks and straddles country, folk and rock with ease, incorporating fiddle and pedal steel as well as some crunchy electric guitars and big drums. Abi and Chris got along so well that Gage and his wife and partner Christine Albert (together known as the Americana duo Albert and Gage) collaborated with Abi to release The Beauty in the Ruin on their label, MoonHouse Records. Happily, Abi is packing up and heading out across the country with her wanderlusty music in hand.

With a new album to promote, a strong community of friends and fellow artists in Austin, the energy of and support of her partnership with MoonHouse Records and the ability to find the bright side in any situation, how could Abi not be smiling? But she won't stop moving, because there could always be something even better just over the horizon.

The Beauty In The Ruin

One Foot Out the Door

This Life Will Be Mine