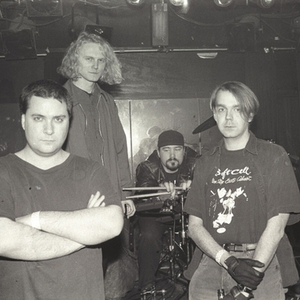 Digital Poodle is Toronto's answer to the Vancouver industrial sound. First appearing in 1987, Digital Poodle's earliest efforts were released on five cassettes, all on their own Shadow label: Pay Attention (1987), Poodle Crematorium (1988), Snivel (1989), Live Death (1989), and Baltic Work Force (1990). Six of these early tracks can be found on their Noisea (Cleopatra) compilation CD. In 1991 the band signed with DOVentertainment, with DOV standing for Death of Vinyl, a reference to the vinyl vs.

In 1991 the band signed with DOVentertainment, with DOV standing for Death of Vinyl, a reference to the vinyl vs. CD conflict of the time. Their first release on DOVe was Soul Crush, a strong mix of industrial harshness and danceworthy rhythms. This CD spawned their first 12-inch
single, thus allowing club vinyl spinners to appreciate their canine sensibilities.

Work Terminal was first released in 1992, a varied set of remixes of songs from Soul Crush and three new songs. Remix styles ranged from harsh industrialism to more mainstream techno approaches, and even included an extended remix by electronic experimentalists Zoviet France that foreshadowed today's popular ambient scene.
This disc was first released on Oli Rosche's DOVe Germany/Hypnobeat imprint, and was later re-issued in 1994 on Metropolis Records.

Digital Poodle reappeared with an EP of new material in 1993: Elektronik Espionage, which showed that the two year hiatus had not spoiled their touch. Their music was now more accessible, but was it that they had changed or that the rest of the world had caught up.

Their next release was a vinyl only 12" featuring their hard-acid techno basher "Crack!", released on the newly formed DOV UK/Ninja Tune imprint, which brought the group to the attention of top British DJ's such as Dave Clarke and Technohead.

The single was followed up in 1994 with Division!, which was released in North America on CD by Cleopatra Records and on double-vinyl and CD with DOV UK/Ninja Tune.

The Poodle's most recent full length release was 1995's Noisea, a collection of early works, remixes, and previously unreleased songs, followed by the Combat! maxi e.p. in 1997.

As for the future, we can only wait by the kennel door.