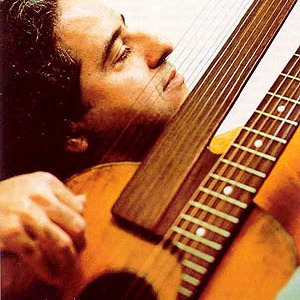 Abaji is a Lebanese-born multi-instrumentalist, singer, and composer. "When I was ten or eleven, I got really involved with sounds. Not just the guitar, but the sounds themselves.? From a musical family?Abaji's Armenian grandmother played the oud (lute), his great-grandmother the kanun (zither), and his six maternal aunts were all passionate and contentious musicians. Abaji started playing and experimenting on an inexpensive Chinese-built guitar alone in his Beirut bedroom...

From a musical family?Abaji's Armenian grandmother played the oud (lute), his great-grandmother the kanun (zither), and his six maternal aunts were all passionate and contentious musicians. Abaji started playing and experimenting on an inexpensive Chinese-built guitar alone in his Beirut bedroom, listening to Cat Stevens, Creedence Clearwater Revival, and Bob Dylan, while strains of Oum Kaltoum and Turkish music drifted in the window. His musical education began in earnest when he fled to Paris after conflict erupted in Lebanon in the mid-1970s. ?I was saved from war, but war also saved me,? Abaji reflects.

He realized that music was his calling and began studying percussion with an inspiring Brazilian player, soon moving on to voraciously explore dozens of other instruments. ?I went through a whole life of instruments,? Abaji muses. ?I'm still buying instruments. Sometimes friends tell me, ?Hey, you don't know how to play those instruments! Why did you buy them?' My answer: "Because I don't know how to play them!? Abaji's passion for instruments?and he has more than 250?stems from his deep desire to take the sounds he began to hear as a young man and turn them into uniquely vibrant, uniquely personal music. As he devoured everything from the bouzouki to the Colombian bamboo saxophone, however, he saw he needed to more than just play them; he had to reinvent them. ?I always have a sound in mind, and one question: How can I bring it to life through an instrument? I had to talk to instrument builders and get them to change things, but I didn't have a dime to my name,? Abaji recalls. ?I had to find solutions with luthiers that weren't so expensive.? This frugality-forced creativity breathed new life into old instruments on their last legs, transforming them into cross-cultural amalgams. The result: one-of-a-kind hybrids like the resonant sitar-guitar or an invention that appears on his album "Origine Orients," the oud-guitar. ?It made perfect sense. I took an old classical guitar headed for the trash, removed the frets so I could play quarter notes, and doubled the nylon strings to have the lute effect,? Abaji explains. ?It was my first step back into paradise. I'm not Spanish. I'm not Lebanese. I'm a Mediterranean guy whose ancestors traded along the Silk Road, the missing link between the two, and the oud-guitar is my double.?

Another missing link unites Abaji's diverse roots and musical visions: ?Everything is related to the blues. People say the blues were born in Africa, but really, they appeared when humanity was born.? For Abaji, the blues is a worldwide phenomenon, a sonic trade route stretching from Afghanistan to the U.S. ?The blues are everywhere: Before America, it came from Africa, but in Africa, it came from the Eastern people who arrived with Islam,? he explains. ?People talk of the banjo coming from Africa. But before that came the rebab from Afghanistan, the great-grandfather of the banjo.?

Abaji has worked to capture his own trans-Mediterranean brand of the blues, not only by creating new instruments, but by developing a unique approach in the studio. For Origine Orients, he decided he needed to record all his songs in a single take playing all the instruments himself, without overdubs. Abaji turned himself into a global one-man-band, in part thanks to the acrobatic aplomb and grace he developed as a tai-chi instructor. He began playing piano with the Colombian sax (?Origine Orients?), or oud-guitar with stomp boxes and rattles (?Min Jouwwa?), singing all the while in a deep voice reminiscent of one of Abaji's favorite folk-blues performers, Greg Brown.

On ?Desert to Desert,? he recounts, ?I had the bouzouki on my lap like a lap steel guitar, with my right hand on the strings. In my left hand was a Balinese bamboo flute I was using as a bottleneck. That meant I could also use it as a flute. And while I'm at it, why not use this as a stick to bang on the daf drum?? Abaji laughs. ?After I recorded the track, I thought I was in deep trouble?that I'd never be able to reproduce it!?