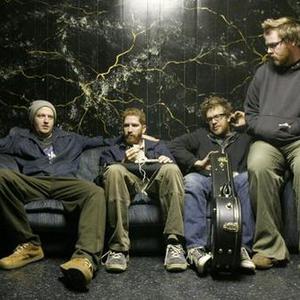 DeYarmond Edison is a band of young men with a propensity for sounding old. Their modern elucidation of the singer-songwriter style comes from having soaked up the soul of the past, as well as a vision of the limitless potential for the future of Americana music. They ring it out on their audiences with a mature variety of instrumentation, including piano, banjo, blues harp, vibraphone, pedal steel guitar, organ, an array of electric and cross-acoustic guitars, fretless bass, and a drum set from the 1930's.

The songs are born from seasoned songwriter Justin Vernon (a Bug Music Nashville-published writer), and expanded, colored and filled in by brothers Phil and Brad Cook (who have been with Vernon for nine years), Brian Moen, Joe Westerlund, and Christopher Porterfield. Their stunning list of influences bleed through into their music without ever taking over DYE's own handle on originality. With feet in the grave of the blues, ala Muddy Waters and Mississippi John Hurt, through to the birth of new Americana music from composers such as Bill Frisell and singers like Richard Buckner ? without ever leaving behind the gospel of Mahalia Jackson, the high lonesome sounds of Ralph Stanley, the wickedness of Tom Waits, the sensibility of Bonnie Raitt, the R and B of Ray Charles and Sam Cooke, the rock of Springsteen, tenderness of Jackson Browne and the hidden existentialism of John Prine. - From Volume One Mag

The band dissolved in 2006, with the Cooks and Westerlund going on to form Megafaun, and Justin Vernon leading Bon Iver. The band reunited to play two shows in their hometown of Eau Claire, Wisconsin in October of 2007.