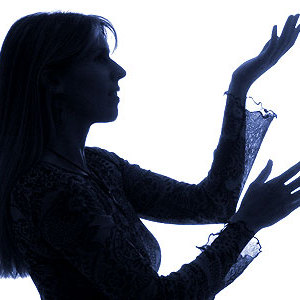 Born in Germany in 1970 of a mystic/artist father and a musically talented mother, she was taught violin, piano and received voice training. By the time she was five years old, she was already chanting the Gayatri Mantra daily, and since that time she continues to integrate meditation into her life. She has studied Shiatsu, Reflexology, CranioSacral Therapy and Massage, but music remains her first love.

She has studied Shiatsu, Reflexology, CranioSacral Therapy and Massage, but music remains her first love. The influence of Indian classical music is evident in her singing, although she has never attempted to copy or steal from the tradition. "It just comes naturally," she says, "as if I'd heard it all before, in another life."
Among the numerous letters of appreciation she has received since the release of her albums, many describe how her music has been used to accompany and enhance the sacred passages of birth and death. In fact, Elisabeth K?bler-Ross, the world famous author of On Death And Dying, requested that Miten and Deva bring their music to accompany her passing. "We have played for many people," says Deva, "but to play personally for Elizabeth was something I will never forget.?

Tibetan Mantras For Turbulent Times (With The Gyuto Monks Of Tibet)

Soul In Wonder (With Miten)

In Concert (With Miten)