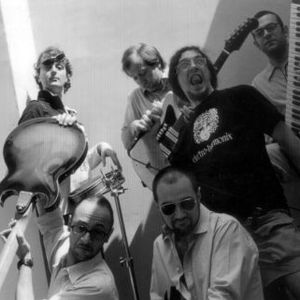 1) Deus Ex Machina were formed in 1989 in Athens, Greece by Dimitris Spyropoulos and Dimitris Manthos. Spyropoulos and drummer Yiannis Venardis were veterans of the local punk scene of the early 80s. The band eventually gained the overwhelming acceptance of the alternative crowds. In the years to come, this resulted in over 500 concerts with increasing success, establishing DXM as a predominantly kicking live band in spite of their limited discography.
In the course of their history DXM have suffered several setbacks including a number of serious car accidents and repeated personnel changes. So far, not only did they persevere, but on top of every adversity, they seem to come out on a limb with added stamina each time. Nowadays, DXM are considered as one of the major established acts of the Greek alternative scene.
ome of the highlights of their history include their appearances at landmark anti-Bosnian war concerts in Skopje, FYROM in 1994. In 1995, on the height of the Bosnian war, they toured Serbia. Year 1996 found them appearing at major festivals in the cause of peace in the Balkans. Year 2000 was marked by their appearances at the Biennale 2000 in Torino, Italy.
Adding to their credits, DXM have left their mark opening for acclaimed international alternative acts such as "The Dubrovniks", "New Model Army", "Madball", "Public Enemy" and most recently "The Buzzcocks".
Over the years DXM have performed in a large number of events promoting social consciousness, something which is reflected on the lyrics and the overall attitude of the band.
As active supporters of the peace movement, they participated in several protest activities against the war in IRAQ. Suffice to say that this last war came as if anticipated by the band's grimly prophetic "Iraq 'n' Roll". The song was written back in 1991 inspired by the then recent Gulf War.
December 2006: first two albums "Motorpsycho" and "Worlds Apart" reissued. Fully remastered, with bonus tracks of long out of print band singles, plus extra rare, older material previously released on compilations only.
http://www.myspace.com/deusexmachinagr

2) Deus ex Machina were formed in 1985 in Bologna (Italy); thus far, D.E.M.
have released seven albums, and have also appeared on four compilations
with other artists.
The artistic development of the group began with the realization of a rockopera.
It was based on an original story, inspired from a sense of the enduring
struggle between Man and Nature. The opera received critical acclaim when it
was performed; the critics described it as "unusual", "powerful" and "extremely
elaborate". In fact, the above praise is that which has been most commonly
ascribed to their music. This, coupled with their particular musical expertise
and compositional skill, has led them to be described as stylistically
uncategorisable, whilst maintaining the distinctive sounds of classic rock.
Finally, the Latin lyrics originate from the need to reconcile the melodious
nature of Italian (which is difficult to transpose into rock), and the immediacy
and fluency of English. Latin presented itself as the ideal solution.
In 1991, D.E.M. and Kaliphonia agreed to record and release the rock-opera
GLADIUM CAELI. The album maintains the integrity of a live recording, but
was recorded in only two days in a studio. As a result of its being rendered in
such a short time, certain technical flaws are evident, which have nonetheless
added a spontaneous dynamic to the recording.
The arrival of Claudio Trotta on drums, and the group's continual search for
stylistic and compositional evolution, led to the recording of their second
album. Biographically named DEUS EX MACHINA, it was written and
recorded between September 1991 and July 1992.
This marked a musical departure from GLADIUM CAELI and, once again, was
well received by critics.
D.E.M. are justly proud of their trademark ethos: a permanent state of
evolution. They have played a large number of live concerts, and feel they
have gained a great deal of experience from doing so. This has helped to
create a stronger bond within the group.
In 1993 they began composing new material: in the summer 1994 they went
into recording studio to lay down the tracks for this album; it was an exacting
task and took almost two years to realize.
DE REPUBLICA, the band's third album, came out at the beginning of 1995; it
marked a progression along the same track that the band had followed in their
previous recordings, but with still fewer compromises. During this time, the
concert activities, as well as their recordings, have placed D.E.M. in the
avant-garde of rock, which has gained them an international audience.
A couple of live albums are the direct consequence of this: DIACRONIE
METRONOMICHE, and the vinyl NON EST ARS QUAE AD EFFECTUM
CASUS VENIT.
In the latest studio album EQUILIBRISMO DA INSOFFERENZA a brass
section has been introduced in order to change once again the composing
techniques of the band.
Still concerts in the USA...in the meanwhile the band works on a a new album
and signs with Cuneiform Records, one of the most important alternative rock
label.
Three years of very hard work brings to "Cinque" on 2002: "powerful sound",
it's been considered the definitive work, the masterpiece of the band.
In 2004 the band plans to release some new songs in a live album preferring
immediacy to studio recordings. And it's also time to celebrate the 20th
birthday of the band (1985-2005): some concerts in Italy, France and Belgium
to record a live CD and a DVD with recent concerts and "historical" stuff, to be
released by Cuneiform in September 2006.

Their new album, Imparis, is a double set that comprises a studio album of new material by the band as well as the band's first-ever DVD. The studio CD contains 45' of new material while the DVD functions as a career overview of their last 10 years, featuring two songs each from their albums Equilibrismo da insofferenza, Cinque and Imparis.
http://www.myspace.com/deusexmachinait
http://www.derepublica.com

4) Deus ex Machina (Singapore). Sept 2004 - Sept 2006 Deus ex Machina (DEM) was formed in early 2004 after Azra-el took a break. Ryan, the ex-lead player for Azra-el and Bhelliom started writing and rehearsing music with Lincoln(drums) and Justin (Fen-rir) on second guitar. Due to their inability to commit, Ryan roped in Gene ( TBK, Bhelliom) for drums and Mak(ex-Angel of Sin) on bass. By the time recording came around, the band was still unable to get a permanent vocalist. Kathi (Rudra), Subash (Kaliyuga, TBK), Vivek, Lord Insanity (MeltgSnow) and Marie Emily (M.E) came on board for this project to lend their vocals, with Ryan putting vocals on one track. The debut album of 7 songs is entitled ?The War Inside', with the band writing all the original material. The album was recorded at TNT Music Studios in Singapore, with KK Wong, Engineering and Co-Producing the album with the sound being influenced by several genres and various bands such as Martyr, Death, Carcass, Meshuggah and Iron Maiden, amongst others. The first album was humanistic in nature, considering everything from war and religion to books such as The Prozac Nation and Da Vinci Code.

Oct 2006 - Dec 2007 The band gig with new members Shailendra on drums, Mithun on permanent vocals, and new bass player Daniel, with Rory on guitars. They record a self titled demo, available only for trades in early 2007.

Jan 2008- Current Deus ex Machina undergoes 2 line-up changes and write throughout 2008 and early 2009. Tharenii from Stillborn and Caspar join the band in 2008 till 2009. Due to some inevitable circumstances, Anand and Thomas join the lineup just before the launch of the new album I, Human.

The new album, ?I, Human' is set in the Death/Thrash mould with melodic structures thrown in. The lyrical content of the album deals with the future: Cloning. Specifically, questions regarding its use, legality, implications and the possibility of a world full of clones fighting to gain their own identity. The concept was brought into place based on the medium of Isaac Asimov's novel ?I,Robot'. Each song builds on an unnamed character as it gradually realizes it is a clone, upon awaking from what it thought was a dream. No gender, no identity. In its desire to strive for acceptance as an equal, the band delves into the mind of the clone and its thoughts, fears and plans as the band brings invokes these emotions and transforms them into an aural assault with thought-provoking lyrics over 9 tracks in the order of:
M(n)emo(nic)ries, The Mask, Replicant, Jigsaw, The Human Strain, I, The Omega Directive, Assent/Dissent. This album was also recorded at TNT Music Studios in Singapore, with KK Wong, Engineering and Co-Producing the album.