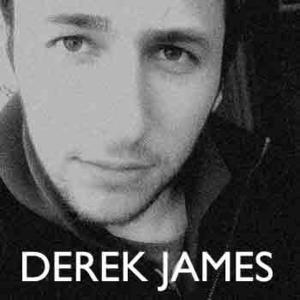 From his first live performance in Australia, Derek James has paved his way from the streets of Southern France to the swanky bar of Manhattan's Trump Tower. His musical canvas is at once a streak of vintage icons, at other times shades of contemporary flavor, but primarily, a whole lotta fresh charisma. His pop/rock music is as eclectic as the places he's lived and the jobs he's held to survive.

His pop/rock music is as eclectic as the places he's lived and the jobs he's held to survive. You name it; he's probably done it! James has worked as a bar mitzvah video editor, sold spa packages, womens clothing, and passed out bottled water at malls to name a few. His debut album, Stray, was written in the basement of a family's home in the suburbs of New York, where he worked as a live-in nanny.

Since starting his career in 2003 the pattern has been consistent, the show has gotten bigger, tighter, and the energy keeps increasing. James was recently a finalist in the Williamsburg 2005 singer/songwriter competition. He has worked with up and coming Yellopop producers, Assaf Spector and Eitan Graff, and now makes his local rounds at NYC premiere venues such as the Knitting Factory, Pianos and Rockwood Music Hall.