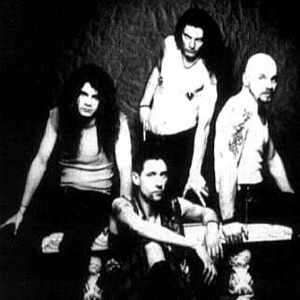 Depressive Age was a German Metal band from Berlin, beginning as progressive 90s Thrash on albums "First Depression" and "Lying In Wait", then adding more industrial and avant-garde sound on albums "Symbols for the Blue Times" and "Electric Scum". The last known line-up consisted of Jan Lubitzki (vocals), Jochen Klemp (guitar), Tim Schallenberg (Bass) and Norbert Drescher (drums). Before they split up, they were very influential with their unique sound, especially thanks to vocalist Jan Lubitzki, yet never managed to grow out of the underground scene.

Formerly known as Blackout (Ger). After the release of the "Electric Scum" album the band was renamed into D-Age.

Symbols For The Blue Times