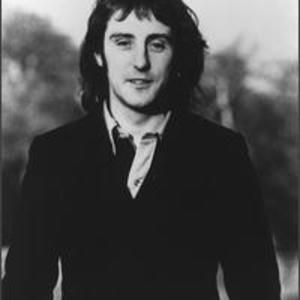 Denny Laine (born Brian Frederick Arthur Hines, 29 October 1944, Tyseley, Birmingham) is an English songwriter and multi-instrumentalist, best known for his roles as former guitarist and lead singer of The Moody Blues and, later, co-founder (along with Paul McCartney) of Wings. Laine is of Romani descent and was educated at Yardley Grammar School, in Birmingham. His first solo performance was at the age of twelve.

Laine is of Romani descent and was educated at Yardley Grammar School, in Birmingham. His first solo performance was at the age of twelve. Having taken up the guitar as a boy, under the influence of jazz legend Django Reinhardt, Laine began his career as a professional musician fronting Denny And The Diplomats, the members of which included future The Move and Electric Light Orchestra drummer Bev Bevan.

In 1964, Laine abandoned Denny And The Diplomats to join The Moody Blues, singing their first big hit, "Go Now. His tenure with the band was short-lived, however, and after a number of comparative failures, Laine quit the band in late 1966. (The last record issued by The Moody Blues that featured Laine was Life's Not Life / He Can Win in 1967.)

After leaving The Moody Blues, he formed Denny Laine's Electric String Band, which featured Denny (guitar, vocals), Trevor Burton (guitar, another former member of The Move) and Viv Prince (drums), also featuring electrified strings in a format not dissimilar to what Electric Light Orchestra would later attempt. They made two singles, Say You Don't Mind / Ask The People (Apr 1967, Deram) and "Too Much In Love / Catherine's Wheel (Jan 1968, Deram); and, in June 1967, they shared a bill with The Jimi Hendrix Experience and Procol Harum at the Saville Theatre in London. However, national attention was not to be, and the pioneering Electric String Band broke up. Laine and Burton then went on to the band Balls from 1969 until the band's breakup in 1971, with both also taking time to play in Ginger Baker's Air Force in 1970.

With Wings, which Laine was a member of from its original inception in 1971, Laine enjoyed his greatest success (even beating The Moody Blues' release of "Go Now"), helping McCartney write such big hits as Mull Of Kintyre. Along with Paul's late wife, Linda McCartney, Laine helped form the nucleus of the band, providing lead and rhythm guitars, keyboards, bass guitar, as well as backing vocals and sometimes lead vocals.

In 1972 Colin Blunstone of The Zombies did have some success as a solo artist with one of Danny's song Say You Don't Mind.

In January 1980, Wings planned a tour of Japan. However, upon arrival at the airport, McCartney was arrested for marijuana possession. The tour was cancelled, and Laine's relationship with McCartney has never recovered. In 1980, he released the song Japanese Tears, a visible attack on McCartney, much like John Lennon's "How Do You Sleep?" in 1971. Laine then slipped off the radar. He filed for bankruptcy in the mid-Eighties (he had sold his lucrative co-publishing rights to "Mull of Kintyre" to co-author McCartney). However, he continued to record music and has appeared at Beatles conventions and on tributes to both The Beatles and Wings. He is currently working on an autobiography.

Wings At The Sound Of Denny Laine