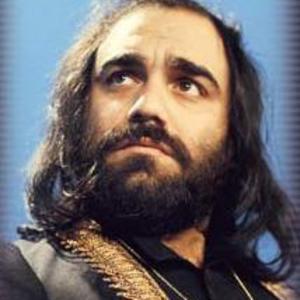 Artemios Roussos was born on June 15, 1946 in Alexandria, Egypt. As George and Olga's first son, he was of Greek extraction. Three years later, his younger brother Costandinos, was born. Throughout his childhood he was influenced by the musics that were coexisting in Egypt. The sound of Arabic music entered into his life at that time and has continued until today as one of his biggest influences. At the age of ten, he was intrigued by Jazz and learnt to play the trumpet.

Throughout his childhood he was influenced by the musics that were coexisting in Egypt. The sound of Arabic music entered into his life at that time and has continued until today as one of his biggest influences. At the age of ten, he was intrigued by Jazz and learnt to play the trumpet. As a young boy he also attended the choir of the Greek Byzantine church of Alexandria and sang for five years as a soloist.

However, when Artemios reached the age of fifteen, his life changed. It was the time of the Suez Canal crisis. His family left Egypt and immigrated to their homeland Greece. Artemios then had to work to support his family. During the day he attended school and, at night, he played the trumpet in various clubs in Athens. Two years later, his first band, "The Idols" was formed. Artemios played the Bass Guitar and sang backing vocals as well. One day, as the lead singer needed to rest, he asked Artemios to replace him for a few songs. That night, when Artemios sang "The House Of The Rising Sun" and "When A Man Loves A Woman" the audience was amazed. From then on Artemios was asked to sing again and again.

Within a short period, Artemios was making a sound reputation. It was at this time that he met the man who would later become one of his most successful composer, Lakis Vlavianos. From that meeting a new band was born, the "We Five", with Artemios as the lead singer.

In 1968 Artemios's journey crossed the road of two other top Greek musicians, Vangelis Papatanassiou and Loukas Sideras. Their associationbecame one of the biggest musical events of the seventies in the form of "Aphrodite's Child". This ambitious band decided to travel to the United Kingdom for better commercial prospects. Artemios--who had now shortened his name to Demis--would be the singer and the bass player, Vangelis the main composer as well as the keyboard player, and Loukas would play the drums.

However, they were refused entry to the United Kingdom for lack of a work permit. Instead, Aphrodite's Child travelled to Paris, arriving just as the city was going through the May 68 revolution. After a few concerts in some trendy Parisian clubs, a major company offered to record a song of theirs, one that was inspired by Pachelbel?s canon called "Rain And Tears". This first album of Aphrodite's Child sold over a million copies in France alone.

Nine months later, as Demis first daughter, Emily, was born, "Rain And Tears" was the top single all over Europe and a top 20 single in the United Kingdom. The band experienced a huge success for three years.

They then released their legendary last album ?666?, after which, for various reasons, Aphrodite's Child decided to split up.

Since Demis was one of the main elements of the band, the record company offered him a chance to recorded his first solo single, "We Shall Dance", which was released on the album "On the Greek Side of My Mind". This album and the single jumped into the top five of all the national hit parades of Italy, Spain, France, Holland, Germany and Scandinavia.

Some months later, Demis met with his old friend of the "We Five", Lakis Vlavianos. Lakis was then going through an inspired period and wrote many songs which Demis recorded; these turned into a string of number one hits all over the world, including: "Forever And Ever", "My Friend the Wind", and "Velvet Morning".

After his second child, Cyril, was born in 1975, Demis toured the globe for eight years with his second wife and child. In Brazil, he packed a stadium of 150 000 people--an event that was achieved in that particular stadium twice only. (The other previous artist was Frank Sinatra.) In fact, Demis sold enough records to gain a name in the Guinness Book of records among the personalities of show business in the 70's and the eighties. He was awarded more than a hundred golden, platinum, and diamond albums and cassettes.

His unique dressing style was often considered eccentric but Demis was following his instinct which told him that the music he was performing should match with the combination of looks between the glorious Byzantine Empire and the Arabic Caftan.

In 1978 his instinct told him again that he should retire for a wile, thinking of new things concerning his career and life. And so he took his family to an area of the world where he was unknown, Malibu Beach, California. There, Demis lost 120 pounds. He returned to Europe and lived a quieter life between England and Greece, alone with his son, Cyril.

On June 14 1985, wile he was travelling from Athens to Rome, a decisive event occurred. Demis's TWA airplane was hijacked by terrorists. After two days in that plane praying, Demis was held three days in the prison of Beyrouth with his third wife. Like many other survivors, he went through the shock of a traumatic experience. After that, Demis said he had never understood so well the importance of the nations living in peace and how precious life is when you see death so close. He felt more than ever that his contribution for a better tomorrow could be via music and so decided to return to the recording and performance scene.

He recorded twenty songs and compiled an album called "The story of Demis Roussos". With this album, Demis started to world tour again and found a nostalgic audience who had missed his magic voice. In 1986 Demis toured the USSR for three weeks and was invited to join important scientists, writers and artists at the forum for peace and disarmament in Moscow, during February 1987.

Later that year, during a tight TV schedule in Chile, Demis insisted on fitting in a visit to the Earth summit in Rio to get a clearer picture of the environmental problems, which are a main concern for Demis.

Since then Demis has been a regular visitor of the charts with singles such as "Quand je t'aime" and "On ?crit sur les murs", and albums such as "Voice and Vision" and "Immortel".

Since 2008, Demis has been living in Greece by the sea. After being one of the most talented singer of his century, Demis is still working on more magical offerings, with the blessing of music and God.

Forever And Ever - All The Hits And More