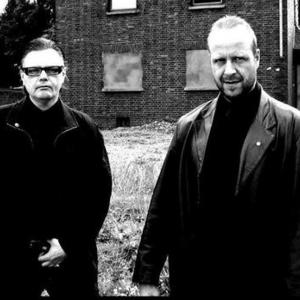 Deinonychus started off as a black metal band in the autumn of 1992 in Brunssum, Netherlands. Over the years, Deinonychus established themselves as a doom metal/dark metal band with as main ingredient; melancholy. The lyrics mainly deal with pain, sorrow, stress, misery, and death. Deinonychus started to get shape, back in Autumn 1992 as a one-man outfit, created by the Dutch Marco Kehren, previously with the Dutch band Malefic Oath.

Deinonychus started to get shape, back in Autumn 1992 as a one-man outfit, created by the Dutch Marco Kehren, previously with the Dutch band Malefic Oath.

A first demo entitled as "Promo 1993" got released in October 1993; five month's before the only rehearsal "A Blaze Over Darkland". In March 1994 the band got signed with Cacophonous records from UK, and recorded their first album "The Silence Of December" in August 1994. Nevertheless, due several delays, the album got released in May 1995. This album showed a first progression into a mix of black/doom metal with extreme vocals.

After this, Deinonychus recorded a second album for Cacophonous Records in February 1996. This new release was called "The Weeping Of A Thousand Years" which had been released in July 1996. This album could be seen as a great and unique mix of black/death/gothic metal with a very emotional touch. Unfortunately, any promotion for this album failed to happen by Cacophonous Records, which resulted in a split between Deinonychus and the label in October 1996.

In March 1997 Deinonychus signed with young UK label Supernal Music. Their co-operation resulted in the release of the album "Ark Of Thought" in November 1997. This was the best album from the band so far, and above all the maturest one? Nevertheless was the co-operation between Supernal Music and the band for a short period, as of promotional reasons. In the same year (1997) Deinonychus did their first and only live gig, at the Hippodrome in London UK for a sold-out audience, which happened to be a success for the band, and rose their profile. The show was filmed for a VHS unreleased titled "Live At The The Hippodrome - London, UK". In the very same year the demo got released on MCD under the title "After The Rain Falls? An Empty Sky Remains" by a Mexican label called Guttural Records.

In January 1999 Deinonychus signed a deal with Ars Metalli from Germany. Furtheron Deinonychus became a two-man outfit. William Sarginson which is known of his works with CRADLE OF FILTH/DECEMBER MOON/THE BLOOD DIVINE; joined DEINONYCHUS as their permanent drummer. The fourth album simply called "Deinonychus" got recorded in August 1999, just before Marco recorded with BETHLEHEM a MCD called "Profane Fettmilch Lenzt Elf Krank". The album "Deinonychus" got released in May 2000 after a delay of six months. This album was the heaviest so far, and very doomy. This album gained the positivest reactions of all Deinonychus-albums till then and established the band for all times?

Shortly after the release of "Deinonychus", the band started to work on their 5th album "Mournument" and took in Arkdae from the French band DARK SANCTUARY/OSCULUM INFAME as their permanent Keyboarder. "Mournument" got recorded in Germany during the summer/autumn of 2000 and was due for release on Ars Metalli in June 2001. But once again things didn't work well. DEINONYCHUS changed label again after Ars Metalli failed to release the album for more than 10 months, which followed in a termination of the contract between DEINONYCHUS and the label during the spring 2002.

In April DEINONYCHUS signed up with MY KINGDOM MUSIC from Italy. "Mournument" was released on September 2002 and reached a great enthusiasm from both audience and media. "Mournument" was the 5th full-length album, maybe the darkest release sofar and surely a monument of grief and melancholy celebrating DEINONYCHUS' 10 years career. It includes the Candlemass' classic ?Ancient Dreams? performed in a magnificent suicidal dress and presents William Sarginson & Arkdae together to enrich this dark creature with their art. The album was released as deluxe Digipack with 20 pages booklet illustrated with amazing photos. A Gatefold LP version was released with different artwork.

After one year spent to promote "Mournument", Marco Kehren flies to Rome to record "Insomnia", a real apocalyptic soundtrack of pain. At The Outer Sound Studios he spent a great time and after 4 weeks a new door towards a world without light was realized. During the summer 2004 the work of mixing and mastering is ended and finally in October ?Insomnia? is a dramatic and magnificent reality...

After this event Marco decided to record a video-clip for the song "Ascension - The 40th Day After Easter" taken from "Mournument" that will be soon presented in a strictly limited edition of the "Mournument" CD with a new artwork and with the addiction of the bonus CD-Rom video of the song. It will be controversial, obscure and unique as DEINONYCHUS uses to be.

After this William Sarginson enter into DEINONYCHUS soul becoming the new effective drummer... Maybe you say: ...again!!! Yes you can say it again. He will surely will record the next album and hope he will experience with Marco the return on stage when and if it will be possible.

Deinonychus is now working on a new album. The writing process will be different from the past. The band will start to write a lyrical concept which might take months to finish. As the concept of the album needs a thoughtful approach and study, it's a matter of much time.

As of today, Marco Kehren still is the main songwriter and composer in that dark creature called DEINONYCHUS.

The Weeping Of A Thousand Years

After The Rain Falls An Empty Sky Remains

The Silence Of December