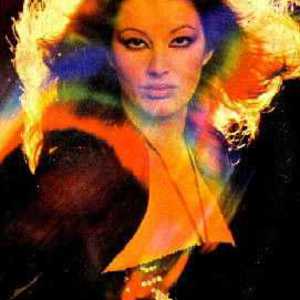 Dee D Jackson, real name Deirdre Elaine Cozier, Born in Oxford, England in 1954. Her Father Roy was a Jazz Pianist and her mother Gloria a chorus girl, dancer and singer, Dee is the the eldest of six children. She was very young when she started playing musical instruments, like the violin and piano, and taking classical dance lessons, but it wasn't until she began middle school that her real talent came to light.

Her Father Roy was a Jazz Pianist and her mother Gloria a chorus girl, dancer and singer, Dee is the the eldest of six children.

She was very young when she started playing musical instruments, like the violin and piano, and taking classical dance lessons, but it wasn't until she began middle school that her real talent came to light.

It was her music teacher that started to nurture her talent, she was chosen to represent her school in all of the concerts that were possible to be part of, and also singing at church weddings.

Her extravagant personality and passion for music made it possible for Dee to meet and get to know famous musicians and Rock bands of that time.

Dee D started her professional career much later in the middle of the seventies, after a trip to Munich, where she met top producers and musicians on the German dance music scene Like Keith Forsey, Harold Feltameyer and Giorgio Moroder.

She began working as a backing vocalist, working with artists like Lou Rawls, and Deodata and sang on a few American adverts, and with a little help from her friends lending her backing tracks, she worked in clubs all over Germany doing one hour sets.

Although things didn't happen overnight, it wasn't that long before Dee was in the studio recording her first single with the bass player/Producer Gary Unwin from Munich Machine and his wife Patty Unwin who later became her manager.

The single was entitled "Man of a Man" it was released with Jupiter records, early 1978 in Germany, Switzerland and Austria, and was never included on any of her albums.

The publics attention wasn't immediate but it was the start of great things to come.

Dee D , Gary and Patty Unwin started putting together a concept album using Dee's natural Theatrical talent, something that could combine elaborate costumes and later for the live shows dance routines, "Cosmic Curves" was born, a little bit of dance a little bit of high energy, a little bit of rock & quite a bit progressive, definitely an album before it's time.

The first single from the album was "Automatic Lover" again released with Jupiter records 1978 which went straight into the charts almost all over the world.

Her first TV show was Top of the Pops where she appeared in her amazing tight futuristic costumes designed for her by Marc Mano, even her make up was made especially for her by the same make up artist used on some of the James Bond movies, she also had a dancer dressed up as her robot, nothing had been seen quite like it, as Dee herself says "a bit camp and quite over the top "this single sold over 8 million copies world wide, the success of Automatic Lover in Brazil was so huge that they even created another Dee D Jackson, a Brazilian Dancer called Regina Shakti, they dressed her up Like Dee D and she was presented to the Brazilian public as Dee D. Although the Brazilian public knew it wasn't the real Dee d Jackson it didn't seem to matter much as she filled entire stadiums miming to Dee's tracks, and was on all major TV shows.

Automatic lover reached number 4 in the British charts for 8 weeks, in Brazil, Argentina, Italy, France, Germany & Japan it reached n. 1 as in many other countries.

Her success was quite overwhelming, and the track was released with different labels all over the world, so when the next single was released in UK and Germany "Meteor man" end of 1978 /79 she was still promoting Automatic Lover in many other countries, Meteor Man was also a hit through out Europe, not quite touching the sales of the Automatic Lover, it charted in UK Brazil, Argentina, all over Europe and Japan, simultaneously the album Cosmic Curves was released.

Dee D spent most of her time touring and in between tours was working on the new tracks for the second album, in 1979 a new single was released entitled "Fireball" a hard style electric track which didn't make its way into the British charts, (Dee puts it down to music politics) as it had a lot of Radio & TV Coverage in Europe and went well in Italy, Germany, Brazil, Argentina, France Denmark and Japan .

The long Version (Mix 12") of Fireball was released only in Germany and was a big success in the clubs.

Still in the year 1979 a new track was released in Italy entitled "Which way is up" and with this track she changed her look, definitely more sexy, with this new look and song she participated at the most important Italian televised manifestation "Festival Bar" wining the title of Miss Festival Bar, then came her winter tour in which she showed her vocal extensions to the full, agility in the dance routines and maybe just a little more crazy in general.

After Months of TV shows and touring in 1980 her second album was released, by this time her Management had changed but still using the same producer, this album was recorded in Munich, although Dee had since set up house in LA, entitled "Thunder and Lighting" this album, came out in Italy with the title of "The Fantastic".

The first single from the album was S.O.S entering the German, French, Brazilian, Italian, Argentinean and Japanese charts, again many TV shows and Tours, a curiosity this single was released in Asiatic countries 4 years later.

In 1981 the single "Talk me down" was released a very original track with the b. side entitled E.S.P. this single was only released in Germany.

In 1982 Dee came back to Europe to set up home in Rome she met the father of her Son, and took some time out from music, when her son was born in 1983, although in this period she wrote songs like "Moonlight starlight" a lovely melodic track which was the theme tune to an Italian prime time TV show released as a single after the track "Shotgun" and "My Sweet Carillon".

In 1985 another single release entitled "Heat of the night" then three years passed until the re-mix of Automatic Lover by Michael Cretu (Enigma) this went quite well in Europe but a big success in Japan.

Dee spent most of the late 80s and early 90s being a Mother doing the occasional tour, but also getting out of bad contracts, which had left a negative effect on the creative side of things, finally in 1994 after two years of writing she came out with the album called "Blame it on the Rain" an album written & produced by Dee d, on this album Dee sang tracks from Pop Rock to Jazz, a mixture of acoustic and electronic sounds, but this album was taken out of the distribution by Dee d after only a few weeks into the release, because she didn't like the way the album was being handled & distributed, and rather see herself going through the same problems already encountered she preferred to pull it.

Dee Then went back to UK for a few years, in her own words "confused, bewildered, and amazed, the disappointment of Blame it on the rain, the death of one of her best friends through her into a two year slumber, until she had an offer from an Italian based record company called "Flying" who put her together with German producers once again Scatman Team, and she recorded a track called people .

Followed by an offer in 1996 to work with a high profile producer in Italy called Michele Generale, who was asked to re-mix Meteor Man, they got on really well and opened a studio together, Dee started writing and producing for other artists while recording many different tracks using different names, Acid Jazz album - EYS Express your soul was released by Avex where Dee is singing two of the tracks included on the album,"You'll never know" and "I wanna be your everything" on this album most of the tracks on this album are written by Dee, vocalist on the album are Sia, Sharon May Linn and Joyce Huille.

Make my day -Birdie written and sung by Dee, "Maybe One day" which was included in the sound track of "La Stanza del figlio" Dee has also written many trance anthems like "Follow You" "I Run to You" "Sensation" by Andora lyrics and vocal melody by Dee D.

In 1996 the single "People" by the Scatman team for Flying Records and at the same time the Re-Mix of Meteor Man by Mike Generale also for flying, at the moment Dee is living between Turin & Uk with the occasional trip to L.A she is running the DDE Records Ltd together with Mike Generale looking after the publishing and managing two of the four labels, whilst working on her own projects, recently she has finished a new track called "dear Julie" that she will be releasing on her own label, + a few different projects in the making.

She is also working towards placing music and making music for USA feature films.