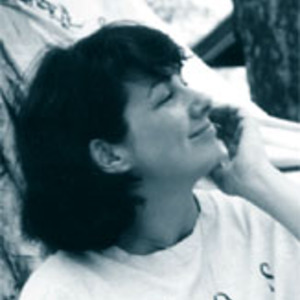 Deborah Martin's ability to visualize and create music is something for which she feels lucky. With a vivid imagination and a deep love of historic places and people of the distant past, we could see her as being blessed; for they are few, those visionaries, who can bring forth into the present, and into our hearts, the spirit of that which has been so utterly lost in antiquity. Deborah has traveled throughout Europe, North America, and Asia, experiencing firsthand the diversity of cultures and the historic threads that weave through time, people, and place to connect us all.

Deborah has traveled throughout Europe, North America, and Asia, experiencing firsthand the diversity of cultures and the historic threads that weave through time, people, and place to connect us all. This perspective enabled her to recognize and uncover the links between present and past, and to interpret the resulting panorama with a compositional style all her own.

Deborah joined Spotted Peccary Music in 1991, and was introduced to us on the album "Tracks in Time." Deborah states, "I had a vision of places, people and events from long ago, and I wanted to capture that vision with sound." Her three compositions, "Tracks In Time," "Watercolors," and "Forgot In Stone" did just that and more. Inspired by the enthusiastic response of those compositions, Deborah began work on her first full length project, "Under The Moon," released in 1995. The album received extensive airplay at the 1996 Olympics in Atlanta. It takes us on a compelling voyage, from dusk till dawn, by lunar light and shadow, to an inner realm of serenity and grace. Deborah enlisted the help of noted bassist, Tony Levin, in bringing this vision to life and creating a truly magical experience.

Sequoia Records artist, Steve Gordon, after hearing "Under The Moon," approached Deborah to collaborate on a project. Her music had many of the stylistic elements Steve wanted to explore. Deborah states, "It seemed like a great idea.....everything just fell into place..."Ancient Power" was pure magic from the beginning." Deborah's very special friend, Edgar Perry, who is a White Mountain Apache of the Eagle Clan, was very instrumental in the thought process for the project. "We listened to his stories and the history of his people. It became the basis for the music. The album comes from a very deep old place within each one of us."

Deborah, who is now one of Spotted Peccary Music's highly acclaimed top selling artists, is joined once again by guest artist and friend, Tony Levin, and now Coyote Oldman in her latest musical vision, "Deep Roots, Hidden Water." Whispery melodies are woven into lush, haunting chordal movements providing the canvas for dramatic coloration by bowed basses, textural guitars, Native American flutes and Taos drums. The effect is both simple and sublime, delicate and powerful. Deborah explains, "I wanted to continue exploring the paths of how we came to exist, to search deeper into the legacy of our past - the imprint of footsteps through time.